When it comes to examples of health injustice, the United States has a wealth of candidates to consider. One of the worst, however, is that more than a decade after passage of the Affordable Care Act (ACA), the very poorest residents in a dozen states remain without a pathway to affordable health insurance because they remain ineligible for Medicaid in the face of state nonexpansion and are too poor for marketplace subsidies.

Before COVID-19, states’ refusal to expand Medicaid already had created a dreadful situation; now, more than 2 million Americans must face a global health pandemic uninsured. Of these, 97% reside in Southern states, with three-quarters living in four states (Texas, Florida, North Carolina, and Georgia). Medicaid expansion has been especially important to Americans from racial and ethnic minority groups because of their greater rates of poverty. The demographics of states that refuse to expand mean that those left out are disproportionately Black or American Indian.

The cause of such gross health inequity is not the ACA, but rather the US Supreme Court’s 2012 decision in National Federation of Independent Business v Sebelius (567 U.S. 519). This decision is best remembered as having saved the ACA from constitutional oblivion, but by a 7-2 majority, the Court also ruled that by attempting to compel coverage of poor adults as a basic feature of all Medicaid programs, Congress overstepped its constitutional powers. In the Court’s view, by striving to help the “able-bodied” poor (a term borrowed by the Court directly from the English Poor Law), Congress had crossed legal bounds by trying to force a “shift in kind” in national welfare policy norms. The Court reached this conclusion despite the fact that where coverage of the poor is concerned, Medicaid’s history has been thoroughly evolutionary, precisely because of its enormous success as an insurer.

NFIB has had an enormous impact. Because the ACA’s marketplace subsidies were designed to pick up where Medicaid left off (138% of the federal poverty level), the decision exposed the poorest Americans to a massive coverage gap in states that did not expand. Thus, while the ruling effectively preserved Medicaid expansion as a state option, its impact was to place millions at risk of being completely barred from health insurance.

Advocates initially were optimistic that states would eventually embrace expansion, since the moral pressure to act would be great and the federal money would be good (about $1 trillion over 10 years). To some degree they were correct. Twenty-six states adopted expansion in 2014 as soon as enhanced federal funding became available. Over the next 7 years, 13 more states expanded, some through the normal state plan amendment process and others on a federal demonstration basis under § 1115 of the Social Security Act. 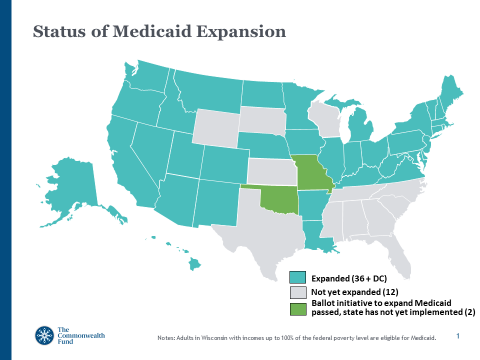 But 7 years after implementation began, 12 states—a number nearly equal to the post-2014 expansion states—continue to refuse expansion. The situation is vastly worse than the track record for state adoption of the original program, which all had joined by 1972 (Arizona would do so a decade later). That so many states continue to oppose expansion says much about today’s political, social, and cultural environment, which, even during a public health emergency, manages to overwhelm both humanity and common sense.

What can be done for the victims of this total health policy breakdown? NFIB underscores the importance of a continuing effort to encourage states to expand, since coverage no longer can be mandated universally. To this end, the American Rescue Plan Act (Pub. L. 117-7) contains a new Medicaid expansion incentive that may pique the interest of a couple of states. But skepticism about expansion remains widespread, and given the large number of states that still refuse to do so, it is likely that the incentives will need to be strengthened. In truth, the holdouts with the largest uninsured populations (Texas and Florida) see no reason to adopt expansion. As a parting reward for continuing to refuse to cover their poorest residents, the Trump Administration granted both states a 10-year extension of their 1115 Medicaid uncompensated care pooling demonstrations each of which provides the two states with vast sums that mitigate the financial impact of their catastrophically high uninsured populations. Not to be confused with Medicaid’s longstanding, essential, and highly targeted disproportionate share hospital (DSH) financing program, these pooling mechanisms choke off reform by affording states the resources and flexibility to avoid expansion. Ironically, in 2005 during a dramatically different era, the George W. Bush administration informed Massachusetts—which similarly maintained a substantial 1115 uncompensated care pool—that the days of funding pools as a substitute for insurance were over and that it was time to move forward with a universal insurance strategy.

Congress and the Biden administration can strengthen the incentive for states’ coverage by ending pooling in lieu of coverage as a federal Medicaid policy option. Just as the administration has moved to terminate Medicaid work demonstrations as inconsistent with federal Medicaid policy objectives, it can withdraw approval for Medicaid pooling. Furthermore, without running afoul of NFIB, Congress can bar the HHS Secretary from using demonstration powers to create uncompensated care pools. Such a shift in policy does not amount to the legal punishment that NFIB prohibits. Rather, ending demonstration pool authority simply reflects a policy preference that Medicaid operate as insurance, not as a “slush” fund.

With no pooling strategy to fall back on, more nonexpansion states might move forward. Equally important, states that have expanded would get the clear message that, should they drop expansion (which, after all, is a state option), uncompensated care pools will not be in their future.

In the meantime, what do we do for millions in desperate need of coverage? The answer is clear; indeed, such a solution should have been part of the American Rescue Plan Act. Residents of current nonexpansion states should be given fully subsidized Marketplace coverage at least for the duration of the public health emergency and the post-emergency recovery period. To be sure, Medicaid is the most comprehensive coverage ever designed for the poor. At the same time, research has shown Marketplace plans to be quite effective—and infinitely more just than no coverage at all.

The fact that so many states have reacted to NFIB so irrationally and with such animus is simply tragic. But far more tragic would be refusing to open the Marketplace—since 2010 our most basic, nationwide coverage safety net—to the poorest Americans in the midst of a pandemic while this high-stakes political and ideological chess game continues to play out.

Sara Rosenbaum is the Harold and Jane Hirsh Professor of Health Law and Policy and founding chair of the Department of Health Policy at the George Washington University School of Public Health and Health Services. She also holds professorships in the Schools of Law and Medicine and Health Sciences. A graduate of Wesleyan University and Boston University Law School, Rosenbaum has devoted her career to issues of health justice for populations who are medically underserved as a result of race, poverty, disability, or cultural exclusion. Between 1993 and 1994, Rosenbaum worked for President Clinton, where she directed the drafting of the Health Security Act and designed the Vaccines for Children program, which today provides near-universal immunization coverage to low-income and medically underserved children. Rosenbaum is the leading author of Law and the American Health Care System (Foundation Press, 2012) and has received many national awards for her work in public health policy. She is past chair of AcademyHealth and a member of the Institute of Medicine. Rosenbaum also has served on the CDC Director’s Advisory Committee and as a Commissioner on the Congressional Medicaid and CHIP Payment and Access Commission (MACPAC), which she chaired from January 2016 through the expiration of her term in April, 2017.