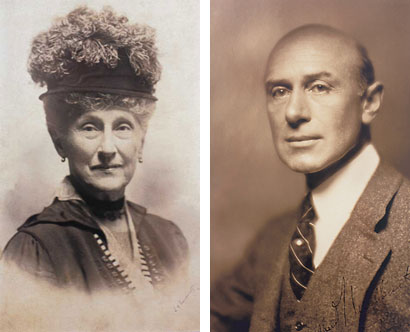 Elizabeth Milbank Anderson and Albert G. Milbank established one of the first general purpose foundations, the Memorial Fund Association, in 1905; it was renamed the Milbank Memorial Fund in 1921, following Elizabeth’s death. The mission of the Fund since its inception has been to improve the health of individuals and populations by applying the findings of the best available research and relevant experiential learning to health policy and practice. Beginning with its founders, the Fund has benefited from the guidance of a succession of leaders who have served as presiding officers, chief executives, and/or members of its Boards.

The Centennial Report, published in 2005, is a chronological survey of the work of the Fund during its first century. It highlights contributions such as the Fund-supported New York State Public Health Demonstration, the launch of The Milbank Memorial Fund Quarterly Bulletin (now The Milbank Quarterly), the Fund’s development of some of the first US public health surveys, and much more.

In “The Significance of the Milbank Memorial Fund for Policy: An Assessment at Its Centennial,” Daniel M. Fox, the Fund’s president emeritus, documents and seeks to explain the significance of the Milbank Memorial Fund for health policy and practice since its founding. He concluded, and the medical historians who reviewed the article before its publication in the Quarterly agreed, that the Fund has made its most important contributions by partnering with decision makers in the public, private, and nonprofit sectors to apply the best available scientific evidence and practical experience.

The special issue of The Milbank Quarterly reprints articles from the journal’s first eighty-three volumes that explore significant research in epidemiology and the policy sciences and its implications for policy and practice in health care and public/population health.

An archive of documents pertaining to the history of the Fund is available at the library of Yale University at http://hdl.handle.net/10079/fa/mssa.ms.0845.

In 2020, amidst a national reckoning on race and inequality, Milbank Memorial Fund began a Diversity, Equity, and Inclusion review that involved a full examination of the Fund’s history, including our regrettable involvement in the U.S. Public Health Service (USPHS) syphilis study. Our Racial Equity Statement of Purpose acknowledges and apologizes for Milbank Memorial Fund’s role in this shameful, racist study and outlines our organizational, programmatic, and communications commitments to racial equity. For more details about our efforts to make amends and commitment to advancing health equity, please visit the Racial Equity Statement of Purpose page.