Toward a Two-Dimensional Conception of Socioeconomic Status for Health Policy

If we have (re-)learned anything from the COVID-19 pandemic, it is that any new health shock is borne differentially by those of different socioeconomic statuses (SES) in society. Whether it is because of position in the labor market (with those of lower SES more likely to be doing front-line work that exposed them more), or because of health behaviors (such as smoking), or because of differential rates of underlying conditions (such as diabetes), lower income, less educated individuals have faced higher risk of infection and greater mortality due to COVID-19. None of this is news.

It is well-known in health policy circles that health causes socioeconomic status (by affecting educational and labor market success) and that socioeconomic status affects health through a variety of channels. Indeed, those channels are so myriad and fluid, it has led to a theory called the “fundamental cause” hypothesis. First put forth by Bruce Link and Jo Phelan, this perspective claims that low SES is a root cause of ill health and that it is only the specific disease mechanism that varies over time.[1] Smoking—and its associated sequelae—at one time displayed little in the way of a social gradient. But, as we learned more about the risks of tobacco use, a gradient emerged. Meanwhile, for a disease we still do not know how to prevent or treat—such as many forms of brain cancer—SES is not predictive of the illness or of its consequences.

If SES is so fundamental to health, it behooves us to think as carefully about how we conceptualize that “variable” as we do about the health side of the equation. While there is much research in health policy circles as to how to define and measure health—ranging from clinical sub-typology of attention-deficit hyperactivity disorder (ADHD) to biomarkers of aging to sensitivity/specificity concerns surrounding COVID-19 tests—scholars in this domain have spent less time thinking systematically about what SES actually is.

Indeed, the most common approach to measuring SES in epidemiology, public health, medicine or related fields is simply to ask individuals how much schooling they have completed. Answers are then either categorized—less than high school, high school, some college, college or more than college—or converted into a number representing “highest grade completed.” This is a great measure because most people readily know the answer to the question (whereas they might not know, offhand, their income this year), there does not appear to be any significant amount of social desirability bias in the answers, it is largely unchanging once someone is past early adulthood, and it is quick and easy to ascertain. Most importantly, enough research shows that education is a strong correlate of health, on the one hand, and other measures of “social class,” on the other hand.

But if we want to better understand social gradients in health as a fundamental cause of morbidity and mortality, and if we want to make good policy decisions around the social determinants of health, we might want to invest in a more rigorous, complex view of social stratification. To that end, Figure 1 depicts one possible framework for thinking about the variables we typically throw around for “SES”—namely, education, occupational status, income, and my addition to the SES literature 25 years ago, net worth (or wealth).[1],[2],[3] 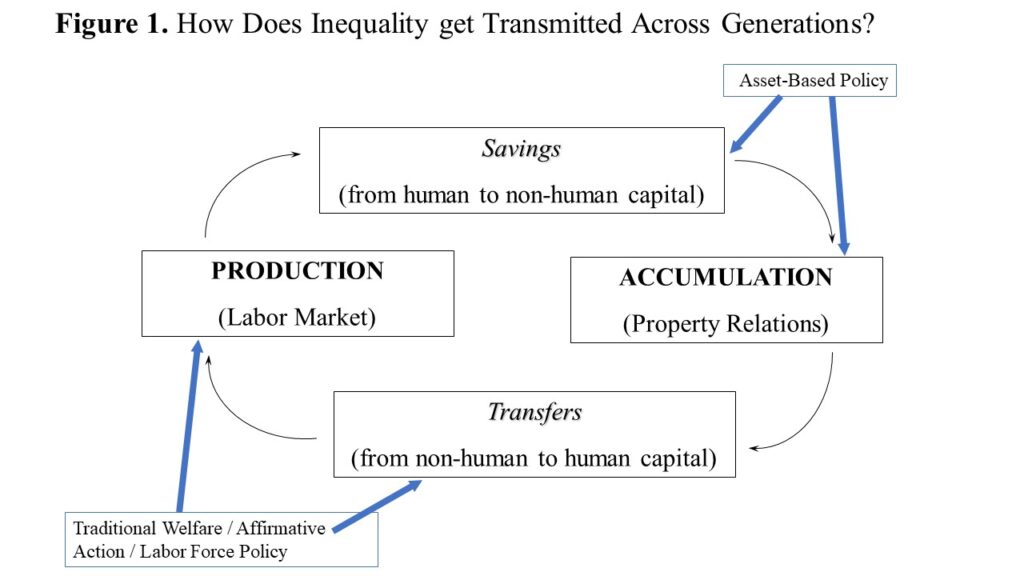 Typically, we think of inequality as being primarily situated in the labor market—“What do you do for a living?” or “How much money do you make?” In a heuristic of this kind, education is a good proxy for these two questions since it is so predictive of the answers to them—and growing more so in a knowledge economy. This assumption, however, is a bit pernicious,  since it assumes the ideal of meritocracy is operant: namely, people who work hard and are smart get good degrees (i.e., markers of human capital), which they then turn into rewards in the labor market in terms of prestige and pecuniary returns.  In this worldview, disparities are implicitly mostly a result of different talents and, thus, are viewed as somewhat natural.

But there is another dimension of inequality that lies outside the labor market: property relations. One’s class position on this accumulation dimension is captured by one’s net worth—the sum total value of one’s assets (financial assets, such as stocks, bonds, retirement funds, and so on as well as one’s non-financial assets, such as a home or a non-tradable business) minus all outstanding debt. Someone can occupy quite a different position in the accumulation dimension than he or she enjoys on the production (labor market) dimension. Think of someone who has inherited a vast sum of money but hardly works at all. Or a low-income artist who was lucky or savvy enough to have bought his or her loft apartment 40 years earlier in a neighborhood that has since gentrified.  Both individuals would be high-wealth, low-income. Or the converse: A first-generation college student who has made it to a prestigious law firm but who is still saddled with hundreds of thousands of dollars of student loans. The existence of this domain as a second, somewhat distinct, dimension of inequality is suggested by the phrase, “new money”—the notion that there is an “old” form of money that exists independent of labor market returns. Indeed, empirically, my research has shown that the correlation between income (averaged over several years) and net worth is only about .6—that is, they are related but clearly one is not wholly predictive of the other.[2],[3]

Though distinct, these two dimensions are, in my view, somewhat fungible. One can, of course, convert success in the production dimension into returns in the accumulation dimension through the simple act of saving and investing. Likewise, there is an arrow from wealth to labor market success through educational transfers. Most often, we cash out wealth to invest in our children’s education (who can afford to pay out of their weekly paycheck?), but on occasion, we may even cash in on our position in the accumulation dimension to finance our own human capital acquisition. Of course, even this two-dimensional schema is an oversimplification.  We could easily, for example, envision arrows going from education to savings – since financial literacy may affect savings behavior. Moreover, the education of one generation predicts the education of the subsequent generation (even independent of genes) without having to be converted into labor market or property returns first.

Within this stylized figure, however, we can see that most policies meant to enhance opportunity (or reduce SES disparities) focus on the lower left quadrant in the areas of education (everything from Title IX monies for poor children in K-12 schools to Pell Grants for higher education) and the labor market (ranging from disability insurance [Supplemental Security Income] and other income supports to minimum wages, the earned income tax credit, job training programs, and even empowerment zones). There are relatively few policies directed at the upper right quadrant to promote savings among the wealth-poor (or, rather, savings policies, such as 529 College Savings accounts or pretax contributions to Individual Retirement Accounts that typically benefit the rich rather than low-wealth individuals) or to directly address asset poverty (through, say, baby bonds or redistributed wealth taxation).

Separating these dimensions helps to bring into clear focus what might have once been a moiré pattern of interference that resulted from collapsing them into one. For example, with respect to racial disparities: While there is a persistent income and schooling gap between whites and African Americans, that gap is dwarfed by the difference in net worth. The typical (median) Black family owns about one-tenth the wealth of the typical white family.[5]  That is, the disparity on this dimension is much greater.  Moreover, when we analyze the effects of family background—the race, wealth, income, occupation, and education of parents—on educational outcomes, we find that racial disparities in academic outcomes are eliminated and that the only background predictors that matter are parental education and net worth.[3] This helps us understand that the root source of ongoing racial disparities in the education system originate largely outside that system—with the class background of parents—and behooves us to direct resources to address those sources.

Meanwhile, it is known that health is affected by social class, but we really do not know which dimensions of SES affect which aspects of health or contribute to racial disparities. One could imagine generating a number of hypotheses that emerge from this two-dimensional view. For example, health behaviors might be best predicted by education level, but stress-related outcomes such as hypertension or depression might be more related to property class position (the accumulation dimension) since high wealth may have more of an anxiety-reducing function given its role as an economic buffer and source of financial security. We simply don’t know yet.

What we do know from research in other areas—like the education findings mentioned above—is that having a valid and robust measure of socioeconomic status helps expands the range of policy levers one might consider.  The domain of health is no exception in this regard.  We need to think about savings policy as health policy, and property taxes as a health input if we hope to truly understand the social determinants of health and to address that “fundamental cause” of health—social class.

Dalton Conley is the Henry Putnam University Professor in Sociology at Princeton University and a faculty affiliate at the Office of Population Research and the Center for Health and Wellbeing. He is also a research associate at the National Bureau of Economic Research (NBER), and in a pro bono capacity he serves as dean of health sciences for the University of the People, a tuition-free, accredited, online college committed to expanding access to higher education. He earned an MPA in public policy (1992) and a PhD in sociology (1996) from Columbia University, and a PhD in Biology from New York University in 2014. He has been the recipient of Guggenheim, Robert Wood Johnson Foundation and Russell Sage Foundation fellowships as well as a CAREER Award and the Alan T. Waterman Award from the National Science Foundation. He is an elected fellow of the American Academy of Arts and Sciences and an elected member of the National Academy of Sciences.