The Strange Journey of Population Health

About a decade ago, researchers defined the term “population health” to mean the “health outcomes of a group of individuals, including the distribution of such outcomes within the group.”1 Their goal was to broaden the discussion of health policy in the United States beyond the “biomedical paradigm” and to encourage investigation into and policy development of the underlying causes of illness. As originally conceived, the term encompassed the impact of income inequality, educational differences, and unjust disparities. Since then, population health has come to mean many different things to many different people. 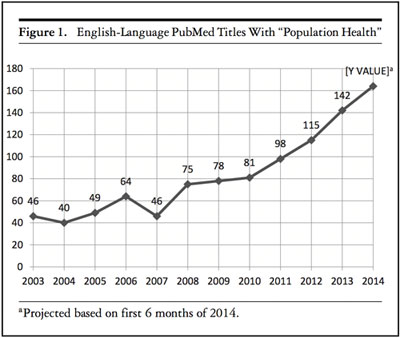 Recently, I turned to PubMed to assess the use of the term “population health” and found that its appearance in journal titles is on track to double since 2010 (Figure 1). This popularity, however, may be growing in direct proportion to a lack of clarity in meaning.

Under cross-examination, I will admit that when insurers take steps to make their members healthier, it can count as a population health effort—with the “population” defined by those who carry around a particular benefit card. Similarly, when a health care provider undertakes an initiative to improve outcomes among those in its care, it also can qualify as a population health initiative—with “population” meaning those who walk through the clinic or hospital doors.

It obviously is good news that many in the health care system are now using a term to express their interest in improving the health of those they are serving. It is especially promising that medical students are learning about actions that can help improve the health of groups of patients at a time. But something is lost when the term “population health” used predominantly by those whose vision may be limited to the group of people they know, see, and track. Poor health is found— indeed, is more likely to be found—among those without a medical home, those shuffling between periods of no health insurance and periods of temporary coverage, and those facing financial, linguistic, and other barriers to care. Initiatives by insurance carriers and clinicians may miss these groups entirely.

Slowly but surely, “population health” as a term appears to be losing its connection with why it was defined a decade ago. Insurers and health care providers have a number of tools at their disposal that can be better utilized to improve health, but they rarely address the social causes of illness. Instead of serving as a light to illuminate the world outside the boundaries of medical treatment, the term “population health” has become a mirror that reflects back to the leaders of the health care system various ideas for initiatives under their control.

A bold strategy to improve health must go beyond the usual recommended prevention, clinical quality, data integration, and care coordination efforts. It must extend past what a clinic or insurer can do on its own. It must incorporate social and policy initiatives to improve health, and it must define success or failure by not only those served but also those left behind.

There is another term for such a comprehensive approach, and that term is “public health.” Public health agencies can address environmental contributors to asthma, lead successful efforts to reduce tobacco use and other behaviors that undermine health, and partner with zoning, housing, transportation, and other agencies to advance the health of a neighborhood, city, county, or state. Effective leaders in local and state health departments bring a unique set of tools to address poor health, and they can assess trends using a wide range of reliable metrics.

Here’s a modest proposal: Medical schools get to keep using the term “population health,” but only if they aim to teach students key public health competencies (as at least 16 in the United States do so far). Insurers and clinicians also can continue using the term “population health,” but with a few conditions. These include collaborating with those agencies responsible for a geographic population; investing in the use of innovative and creative approaches to improve outcomes, including those not under their direct control; and participating in coordinated initiatives to address the underlying causes of illness. Otherwise, we may find ourselves awash in population health efforts, without meaningful progress in the health of our population.

Joshua M. Sharfstein is associate dean for public health practice and training at the Johns Hopkins Bloomberg School of Public Health. He served as secretary of the Maryland Department of Health and Mental Hygiene from 2011 to 2014, as principal deputy commissioner of the US Food and Drug Administration from 2009 to 2011, and as the commissioner of health in Baltimore, Maryland, from December 2005 to March 2009. From July 2001 to December 2005, Sharfstein served on the minority staff of the Committee on Government Reform of the US House of Representatives, working for Congressman Henry A. Waxman. He serves on the Board on Population Health and Public Health Practice of the Institute of Medicine and the editorial board of JAMA. He is a 1991 graduate of Harvard College, a 1996 graduate of Harvard Medical School, a 1999 graduate of the combined residency program in pediatrics at Boston Medical Center and Boston Children’s Hospital, and a 2001 graduate of the fellowship program in general pediatrics at the Boston University School of Medicine.