The “Great” Generation and a Not-So-Great Health System

My travels usually take me to far-flung places, but today is different. I’m on a train to New York City, shuttling back and forth from Washington, DC. My father is 101 years old, and just one year ago he gave a 30-minute speech without notes at his centenary birthday celebration. He ended his speech saying, “I’m often asked how I lived so long. The answer is I just lived.” An uncomplicated man who lived a long and complicated life, staying mindfully in the present.

But he also said something that lingers in my memory about aging: “At a certain point I could no longer play handball, no longer swim, and no longer bike—but that was all right. I will remain happy as long as I can walk.” Only 4 weeks ago, he would take a daily mile-long stroll through Kissena Park in Queens, the lake flanked by weeping willows and shady trees—pausing to sit on a bench to read the New York Times, watching the swans. Now he is bedridden, felled by a massive leg infection that he never realized was sapping him of life. The journey is a profound one for me too. My mother died young so I never experienced the weight of managing care at life’s end. Here is my deeply personal story about my father.

Allow me to first introduce you to this 101-year-old man, who actually met Civil War veterans, whose sister was killed by a horse and carriage, whose only true president was FDR (and who in a century never saw anything like our current president), and who fought for workers’ rights as a shop steward on the factory floor. Latvian by descent, he met my mother, who had fled the Holocaust from Warsaw.

In 1955, he took out a second mortgage on his house to pay for an operation on my mother’s “inoperable” pituitary tumor. When the surgeon botched the operation, my father took out a third mortgage to pay for still another costly operation. After years of slow deterioration later, my mother died languishing in a Veterans Administration (VA) hospital.Now my father wants to go to a VA hospital to avoid “spending down” his remaining assets to qualify for Medicaid. The most important thing for him is the financial security of the lovely wife he married after my mother’s death, a spry “young” 89-year-old treasure. They hold hands for hours, as she rests gently on his hospital bed. I discovered to my surprise that World War II veterans without service-related injuries score rock bottom on the VA’s priority list. Think what that says about America, failing to care for a veteran who fought the Nazis in the Pacific.

As my father lived in a poor neighborhood, the ambulance took him to the local city hospital. For over a week, no doctor would talk with me or return my calls. The caseworker (social worker) just handed me a piece of paper listing rehabilitation clinics. The hospital never asked my father what he wanted, although he was entirely lucid. (Nor did they ask me, his medical proxy.) What he wanted was a dignified, humane dying process. He told me he had lived the richest life imaginable, filled with the love of children, grandchildren, and great-grandchildren. I struggled hard to make sure the medical charts registered my father’s wish for a do-not-resuscitate order, but it never seemed to make it into his records.

The hospital offered no help on how to choose an appropriate setting, or how to pay for his care. The doctors and social workers didn’t even seem to care what the family wanted or whether we could afford nursing care. It was only when the hospital was trying to push him out the door that his physician and social worker called me—and harassed me—threatening to discharge him. I insisted he was not ready. He was bedridden, refusing food, with a raging infection, severe hypothyroidism, stage-3 kidney disease, and oozing liquid coming out of every extremity. And he had nowhere to go. Despite my strong wishes, the hospital caseworker went directly to my 89-year-old stepmother, insisting he must leave the following day, bringing her to tears.

No one ever treated me as a son losing a father, or my stepmother as a wife losing a husband. If the hospital staff could bring me to tears, how would such cold treatment affect a poor family without knowledge of the health system? I wrote a multipage letter to the hospital president, shamefully underscoring my life’s work in health. And suddenly the hospital showered the family with attention. Finally, the hospital agreed to geriatric and palliative care consultations. What must this awful process be like for families that are unable to assert their rights?

My father’s life before entering the hospital was filled with joy. A few years ago he traveled to Chicago and to England for my sons’ weddings. Last October, he was the first to arrive at the birth of my granddaughter Aviva. (He took three buses from Queens to Manhattan, two hours each way. His motto: “The car is the enemy.”). Aviva was born on my birthday and her middle name is Sylvia—my mother’s name. I have a remarkable photo of 4 generations: my century-old father, my son, my father’s just-born great-granddaughter, and me—from 0 to 100 years! Just months later, he found himself wishing for a peaceful death. 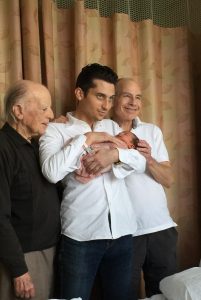 Gratefully, my father’s story ends well. My New York colleagues introduced me to the medical director of a unique specialty hospital that provides palliative care for adult patients with complex needs. Although the Queens hospital would not certify my father’s eligibility for the Medicare Hospice Benefit (he didn’t have a terminal disease!), the specialty hospital medical director successfully made the case that my father met the criteria for care at the facility.Within hours, he arranged for my father’s transportation, first ensuring that applicable Medicare program benefits would cover the full cost.

What a difference an institution makes, as his doctors, nurses, and social workers lovingly explained his care plan. In the ensuing days, he attended a live concert, sat outdoors in the gardens, and read the New York Times. His loving wife slept overnight by his side, and the hospital provided her with grief counseling and social support. His appetite has returned and he has a fresh interest in life’s joys. Of course I know he is likely to die within months. But he will die peacefully, content in the knowledge that his children, grandchildren, and great-grandchildren are his legacy. His wish to my son today was to be with his beautiful wife and daughter. That is the “Great” generation.

Wouldn’t it be fitting if America had a truly great health system, with humane care throughout the life span? In the world’s richest country, is it too much to ask that we treat everyone when they are sick, care for them when they are suffering, and allow them to die humanely and with dignity when the journey is over?