A Beautiful Life in a Vibrant Yet Vulnerable City

I was at a dingy hotel at Narita Airport, having missed my connection from Washington, DC, en route to the World Health Organization Western Pacific Regional Office (WHO/WPRO) headquarters in Manila when I got the call I’ve been dreading. My father died, just shy of his 102nd birthday. Joseph Gostin was the decorated World War II vet I wrote about in my last op-ed.1 He was supposed to die 6 months ago, abandoned in a municipal hospital. A man who fought the Nazis but would be rejected by the Veterans Health Administration.

But then he moved to Calvary Hospital in the Bronx. At Calvary, he felt revived, reimagining his life, not thanks to state-of-the-art medical treatment, but from something more important, less tangible—simple love and tender nursing care. He formed deep relationships with nurses and doctors. (Yes, many from countries our president disvalues and would exclude.) The staff would vie to be assigned to Joe, and he adored them. His doctor, Alma Carrington, would marvel at his life spirit. My stepmother, Lil, rarely left his side, sleeping overnight in a chair next to his bed, holding his hand. He was lucid to the end.

After a massive leg infection last year, he would never walk again, even as he refused doggedly to admit it, doing leg-strengthening exercises daily. Before entering the hospital, he would try each day to do one push-up. For a decade, he never could, but he never stopped trying. It was remarkable that his joy for living overcame the sad reality that he could no longer do the one thing he loved most: walking in the city he treasured. Near the end, he told my sons, Bryn and Kieran, this story: “Yesterday I bounded through Manhattan, over the Williamsburg Bridge where I grew up, dabbling in museums, eating street food.” He paused. “Then I woke up.” Walking vigorously was the recurring dream in his last months of life. 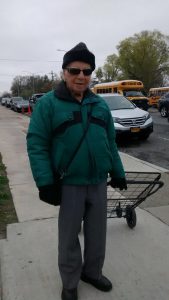 I’m back in New York now for the funeral, after a fatiguing flight from Manila. I re-create his Sunday morning ritual, strolling through Kissena Park in Flushing, Queens. This morning, the park reveals volumes about the city’s pulse, diversity, and inclusiveness—a stark counterpart to national politics. I might easily be in Beijing or Changsha, although Kissena Park is gentler, more serene. The park teems with Asians of every description, from children to the very old, mostly Chinese, some Korean. Tai chi and morning exercises are the park’s themes, infused with melodic sounds of Chinese violins. I especially enjoy the park’s largest class: an eclectic mix of ethnicities (with timid, uncertain Westerners in the rear) scrupulously following the “master,” an African American woman leading with sublime grace and flexibility.

Walking toward the basketball court, African Americans play pickup at an impressive athletic level. Over the ridge is the soccer pitch, with Latinos displaying a deft touch, dribbling and weaving. Look left and watch Caribbeans and British play cricket—oh dear, he’s out, leg-before-wicket.
The most diverse pastime is American football, with a Latino, Caucasian, and African American each captaining his own multicultural team.

In tribute to my dad, I want to talk about New York City, his beloved home for a century. I couldn’t live there—dense crowds, high-rise buildings, noisy traffic. But what a city! My father was the ultimate city guide. In his mid-90s, he led our family’s 3 generations on a full-day tour from Battery Park to Grant’s Tomb. Such tours were a regular treat for our British relatives: Little Italy, Central Park, maybe Harlem. The young couldn’t keep up, as he would stride ahead of the pack. “Watch out,” he’d say, “the car’s the enemy.”

His city was built for movement: The High Line weaves through street art, poetry readings, and flower gardens. New York’s pathways attract millions of walkers, skaters, cyclers. Listen and hear every conceivable language and dialect. Watch and see multiple colors/ethnicities/gender identities, often sharing small kindnesses—a seat on the bench, directions to a museum or coffee shop. Smell and taste the best Chinese cuisine in the world near Main Street, Flushing, where Asian supermarkets, bakeries, and restaurants exude sweet aromas, with their menus exclusively in Mandarin or Cantonese. The experience can be replicated in most city neighborhoods for any cuisine imaginable: Brazilian, Italian, Lebanese, Ethiopian. 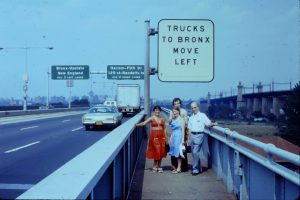 But I fear greatly for New York’s future, as I recently observed in a speech to the City Health Department, the world’s best. Think about three innovative commissioners: Peggy Hamburg, Tom Frieden, Mary Bassett. Or “Nanny” Bloomberg’s “nudges” to eat better, walk more. Yet, New York is a megacity in jeopardy. Its economic engine is imperiled as skilled labor and finance/tech companies might one day leave for towns with lower wages, taxes, and regulations—our nation’s sad “race to the bottom.” The easy thing is to imagine New York’s economic vibrancy will stay the same, but the hard thing is to work for prosperity to endure.

Climate change will bring more Hurricane Sandys and far worse weather events. The rivers will certainly rise and flood the city’s arteries—its electricity grid, hospitals, subway system. London is flanked by the Thames River, while New York is surrounded by two rivers and an imposing ocean. It is far more vulnerable. Yet London built a flood wall. So has the Netherlands. New York has no preparedness plan other than evacuation.

Terrorism remains a constant threat—and more than trucks running down cyclists or lone wolfs detonating small explosives. Still more dramatic events could occur, perhaps even radio-nuclear, chemical, or biological hazard releases. The city’s police are the “finest,” its firefighters the “bravest,” but it is only a matter of time before a catastrophe hits. The city’s inhabitants are resilient, but there will be a tipping point. It may not be Times Square on New Year’s Eve or an iconic building, but some event will generate mass casualties, shuttering the city. Without a plan to build urban resilience, the city may not withstand the next disaster.

During New York’s financial crisis in the 1970s, my father would say, “I’ll never leave a sinking ship.” Many of my family members have moved to warm places: Miami, Houston, Los Angeles. My father was born in New York in 1916, with rising trade unions, manufacturing, and a wave of immigrants building the city into what it is today. He would never leave the city he loved. New York is an astonishing metropolis, but it is crumbling and exposed. It’s not too late to fortify this diverse engine of strength, but I fear greatly for my father’s birthplace.

The funeral is tomorrow, and it seems inconceivable I’ll never hear my dad’s stories again. It will be a celebration of a beautiful life and the vitality of his city that he continued to remind his family about each day, until his last breath.