In Support of Family Caregivers:

A Snapshot of Five States

Family and unpaid caregivers play a foundational role in the care of older adults with complex health needs and disabling conditions by assisting with a wide range of household, self-care, and medical tasks that are necessary for health, function, and community living. According to the Congressional Budget Office, family caregivers produce 80% of the total economic value of community-based long-term services and supports for older adults. We recognize that many Americans support aging family members who do not have disabling conditions. Public funds are mainly used to support family caregivers who provide care for health or function reasons. State funds are typically focused on populations with a relatively high degree of impairment and will be the focus of this report.

Facing the reality of caregiving today, states are building family caregiving into their service delivery systems—both to support caregivers and extend care to the aging population. This report gives the broad state policymaker audience insights into a handful of states that have advanced policies and programs in support of family caregivers.

Despite conceptual appreciation of the importance of recognizing and addressing the needs of caregiving families, little is known about best practices in state and federal policy.

At the federal level, lawmakers are paying attention. In January 2018, Congress passed the Recognize, Assist, Include, Support, and Engage (RAISE) Family Caregivers Act to establish a national strategy to acknowledge and assist family caregivers. This legislation sets forth the possibility of developing a coherent and coordinated plan for policy initiatives, data infrastructure, and supportive programs to better address the needs of caregiving families.

Fundamental to the success of such a national program will be the integration of evidence-based services and supports across health care organizations, social service agencies, and employers. However, a standalone national plan is not enough. The national strategy developed under the RAISE Family Caregivers Act must accommodate, extend, and reinforce the efforts of states and local communities.

States have long led the way in community-based innovations to support aging adults with disabilities and the families who are involved in their care. As states vary widely in demographic characteristics, legislative priorities, and service delivery environments, understanding how states have approached programmatic support for family caregivers could inform state and national policymaking in this area.

This report, cosponsored by The John A. Hartford Foundation and the Milbank Memorial Fund, draws attention to what some states are doing—both with federal investments and state innovation—so that interested states can jump-start or learn from these efforts. The five states described here—Washington, Hawaii, Maine, Minnesota, and Tennessee—were selected because they were identified as having pursued unique policies and programs to better support family caregivers. 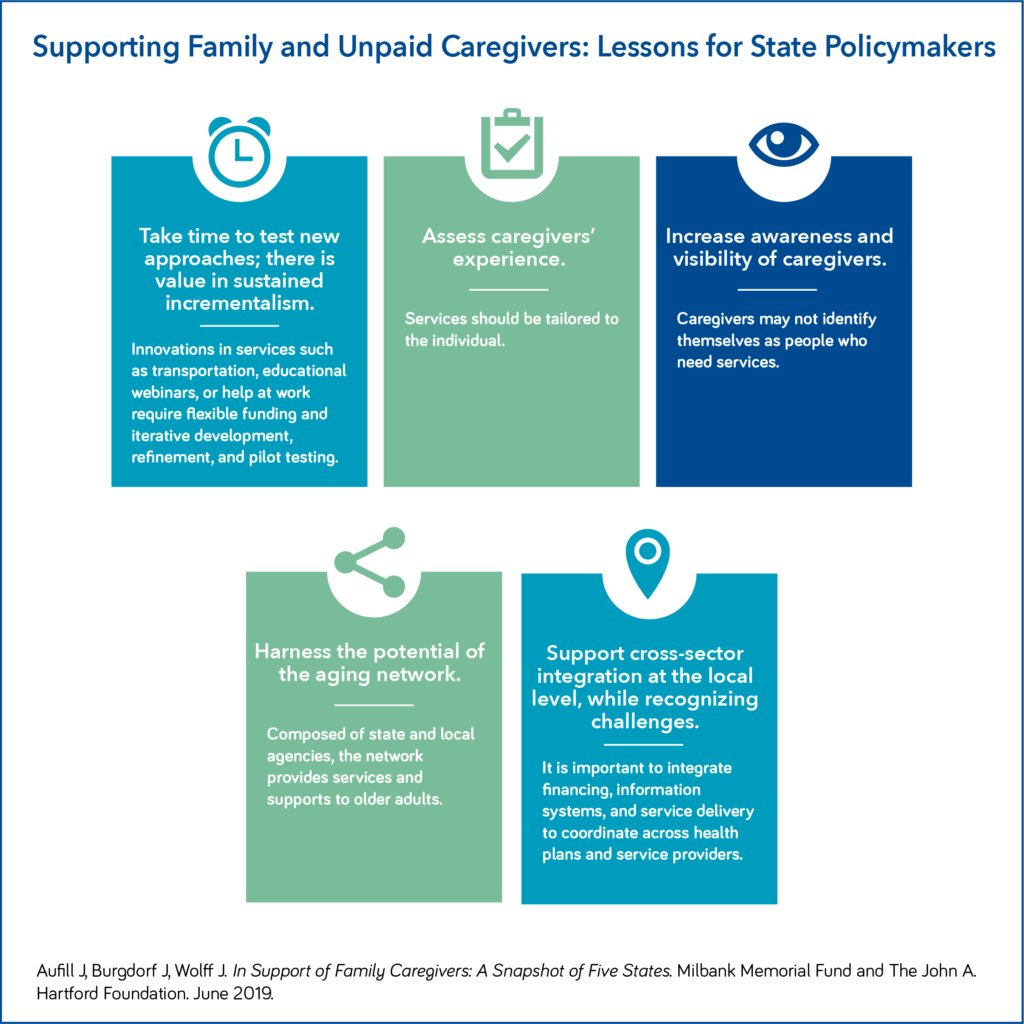