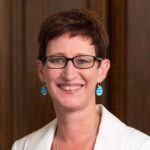 Ann-marie Boxall is no stranger to the push and pull of health care negotiations between national and state governments.

As the assistant secretary in the Long-Term Health Reform Branch of the Australian Government Department of Health, Boxall spent many hours negotiating the Australian 2020–2025 National Health Reform Agreement with states and territories. As part of those talks, she worked collaboratively with states to develop health system reform policies that will improve health outcomes and the sustainability of the system. She negotiated detailed implementation plans with states as well as funding agreements to support them.

Boxall is also the coauthor, with James Gillespie of the University of Sydney, of Making Medicare, a definitive history of Australia’s national health insurance program, which outlines Australia’s long and unconventional path to universal coverage.

Today, Boxall is finding out if some of the lessons from federal–state health policymaking in Australia apply to the United States. She is taking a break from her everyday life of meetings, staff management, and state negotiations to serve as a 2019–20 Australian Commonwealth Fund Harkness Fellow in Health Care Policy and Practice. Based at the Mailman School of Public Health Columbia University, she has the opportunity to immerse herself in research and consider whether the political distance between Washington, D.C., and the state capitals in the US is further or closer than the national and state capitals in Australia.

Boxall’s yearlong Harkness project is exploring the interactions between state and federal government officials during the design, implementation, and review phases of the Center for Medicare and Medicaid Innovation’s (CMMI) State Innovation Models (SIM) initiative. Under SIM, 34 states partnered with CMMI to design and implement multipayer payment and delivery reform models. Boxall will be doing in-depth case studies on six states. Her assigned mentors for the year are Michael S. Sparer, chair and professor of Health Policy and Management at Columbia, as well as Milbank Memorial Fund president Christopher F. Koller and program officer Rachel Block.

“I see the opportunity to work with the Milbank Memorial Fund as critical to the success of my project, which is looking at intergovernmental collaboration on health reform,” Boxall says. “Without the Milbank Memorial Fund, I would struggle to understand the US health system and how it works on the ground — I’m only here for a year — and to find the right experts to talk to, especially in the states.”

Boxall participated in Milbank’s Reforming State Group steering committee meeting in August, where she had the opportunity to have in-depth conversations with key state leaders.  “By opening doors to the right state policymakers, the meeting helped me set up my research in a way that will enable my findings to be robust, meaningful, and useful,” Boxall says.