The Health of Aging Populations Medicaid

Mathematica researchers conducted a study to determine what factors were associated with state variation in participation rates in the Centers for Medicare and Medicaid Services’ Financial Alignment Initiative (FAI) that offered beneficiaries eligible for both Medicare and Medicaid enrollment in integrated Medicare–Medicaid plans (MMPs). The researchers found three major factors were associated with higher enrollment: (1) use of passive enrollment, in which states automatically enroll eligible beneficiaries into an MMP; (2) alignment of key features of the FAI demonstration with the existing state Medicaid managed long-term services and supports (MLTSS) program; and (3) beneficiaries’ relationships with care coordinators. This brief looks closely at the first two factors: passive enrollment and demonstration/MLTSS alignment.

In 2018, nearly five years after the launch of a federal demonstration program designed to integrate care for people who are eligible for both Medicare and Medicaid, the participation rate was stuck at about 30%.

Called the “duals demo,” the program is officially known as the Financial Alignment Initiative. The demonstration is part of an effort to improve the quality of care and lower spending for low-income people who are eligible for both programs, including seniors age 65 and older and adults with disabilities. Because many of these people have complex medical needs and use long-term services and supports, they account for about a third of total spending in each program, despite making up only 20% of all Medicare enrollees and 15% of Medicaid enrollees. Through the initiative, 10 states and the Centers for Medicare and Medicaid Services (CMS) contracted with integrated Medicare–Medicaid plans (MMPs), which are paid a fixed monthly rate for each member, to provide and coordinate Medicare and Medicaid benefits.

The Medicare Payment Advisory Commission (MedPAC), a congressional advisory group, noted that participation rates  in the MMPs have been lower than expected. Federal and state program planners hoped more eligible beneficiaries would join the program.1 Higher enrollment would ensure that health plans had enough members to spread risk, invest in robust care coordination, and if the model achieved its goals, yield greater savings.

At the same time, program proponents and even some experts were puzzled by wide variation in participation rates across states. Plan enrollment among eligible beneficiaries ranged from a high of 67% in Ohio to a low of 4% in New York.

To discover the secrets to Ohio’s success, as well as that of Rhode Island and other states with higher participation rates, Mathematica conducted a study with support from the Medicaid and CHIP Payment and Access Commission.2 We examined how state program design, concurrent state programs and policies, health plan markets, and other factors affected enrollment over time in all 10 states.

Though many forces appear to play a role, we found three major factors were associated with higher enrollment (Figure 1): (1) use of passive enrollment, in which states automatically enroll eligible beneficiaries into an MMP but give individuals the ability to opt out; (2) alignment of key features of the demonstration with the existing state Medicaid managed long-term services and supports (MLTSS) program; and (3) beneficiaries’ relationships with care coordinators. In this brief we take an in-depth look at the first two factors: passive enrollment, a study finding that was consistent with previous research,3 and demonstration/MLTSS alignment, a finding that came as a surprise.

Though this finding was anticipated, we found that how each state implemented passive enrollment mattered as well: how often, with which dually eligible beneficiaries, and the numbers enrolled at any one time. For instance, states that continuously conducted monthly passive enrollment for individuals who became newly dually eligible during the course of the demonstration—such as Medicaid beneficiaries who turned 65 or Medicare beneficiaries who became eligible for full Medicaid benefits—had higher participation rates than those that conducted annual passive enrollment. States with higher participation rates were more likely to passively enroll dually eligible people who were already enrolled in a Medicare Advantage plan, if the plan’s parent company also sponsored an MMP.**

Study interviewees also explained the benefits of staggering passive enrollment into waves, by region or specific groups. It enabled intensive, targeted marketing in each wave. Limiting the number of new enrollees in each wave also gave health plan care coordinators time to establish contact with all new members, explain to them how integrated care works, meet face-to-face to assess their  needs, and establish person-centered care plans, which helped to reduce opt-out rates.

We found that higher enrollment in MMPs was associated with greater alignment of key design features between the state’s dual demonstration and its Medicaid MLTSS program. This link turned out to be a surprising “X factor.” By sharing the same eligibility criteria, geographic areas of operation, and participating health plans, the state agencies and health plans were able to communicate more effectively the advantages of choosing one plan to provide both Medicare and Medicaid services. State Medicaid agencies and health plans alike were able to target their outreach to the same group of beneficiaries and use consistent messaging, making it easier for beneficiaries to understand the benefits. Additionally, when the same health plans offer both MLTSS plans and MMPs in the same service area, the plans have greater incentive to assist enrollees in their MLTSS product to join the fully integrated MMP.

For instance, Ohio, which had the highest participation rate (67%) among all states, was the only state whose MLTSS program and dual demonstration were fully aligned across all program design dimensions (Figure 2). Ohio even uses a single program name, MyCare, for both its MLTSS program and its duals demonstration, which further simplifies program marketing to beneficiaries. In Rhode Island, another state with a high participation rate, the populations served by the two programs were mostly aligned, the service areas were identical, and the state contracted with a single MMP, which was also the sole participating plan in the state’s MLTSS program. This made it easy for MLTSS plan members to join the MMP without having to switch plans. 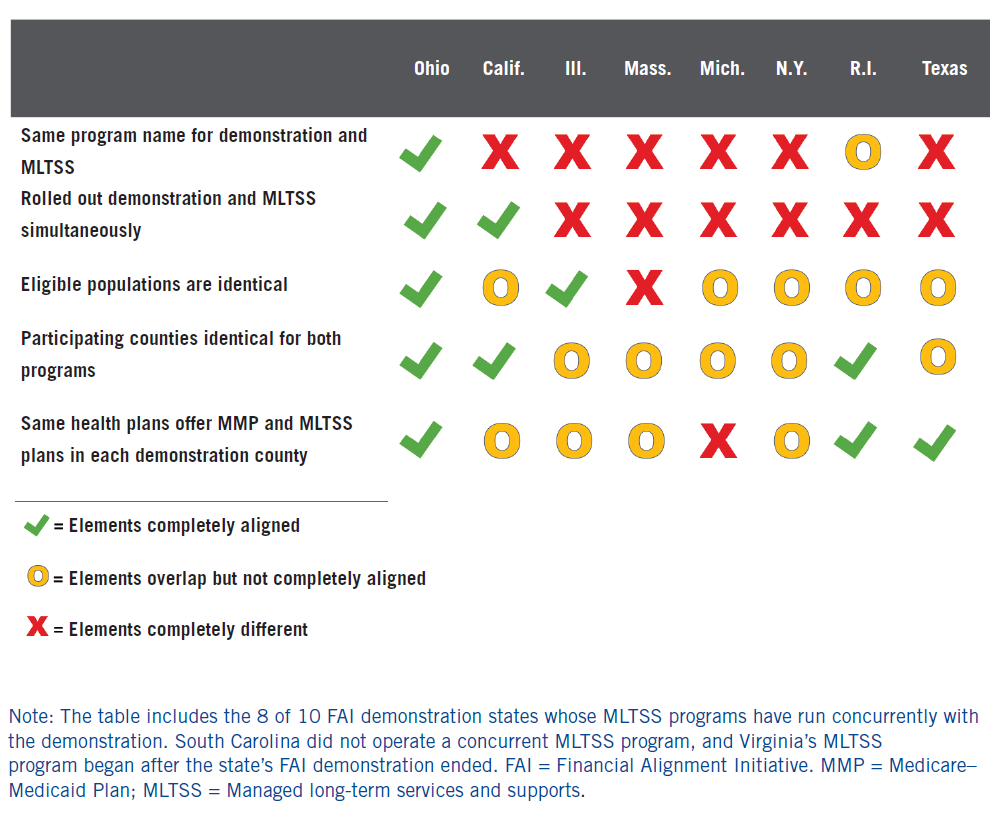 State policymakers can make the choice to enroll in an integrated care plan easy for dually eligible beneficiaries by understanding the secrets to success in Ohio and other states. This study brought to light two principles to follow:

Higher enrollment in the integrated Medicare–Medicaid plans, in turn, should lead to better care coordination and ultimately savings for the state.

* New York operated two demonstration programs, and the one that limited enrollment to individuals with an intellectual or developmental disability in one region of the state did not use passive enrollment.