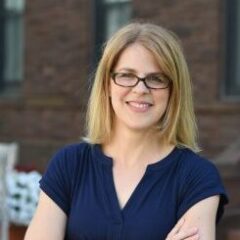 Professor of Government and Codirector of the Wesleyan Media Project, Wesleyan University

Erika Franklin Fowler, PhD, is professor of government at Wesleyan University where she directs the Wesleyan Media Project (WMP), which tracks and analyzes political advertising in real-time during elections. Fowler specializes in large-scale analyses of political and health-related communication—from local media and campaign advertising in particular—in electoral and health policy settings, and her interdisciplinary work on the content and effect of messaging has been published in political science, communication, law/policy, and medical journals. She is also coauthor of Political Advertising in the United States, and she has led WMP’s expansion into computational analyses of digital advertising. At Wesleyan, Fowler teaches courses in American politics, media and politics, campaigns and elections, public opinion, and empirical methods. Her courses typically feature research modules in the classroom, and she received Wesleyan’s Binswanger Prize for Excellence in Teaching in 2019.  Fowler has also secured $2.7M in grants supporting both the Wesleyan Media Project’s efforts and her other research on health policy, and her work with the Media Project has been cited extensively in the nation’s leading media outlets. Fowler graduated summa cum laude with a BA in mathematics and political science from St. Olaf College.  Prior to arriving at Wesleyan University, she spent two years as a Robert Wood Johnson Scholar in Health Policy Research at the University of Michigan and five years as the research director of the University of Wisconsin NewsLab, one of the largest and most systematic local TV tracking projects ever conducted. In addition to her media commentary on election advertising, Fowler has extensive professional experience in conducting survey and focus group research. She also serves on the ABC News Election Night Decision Desk.