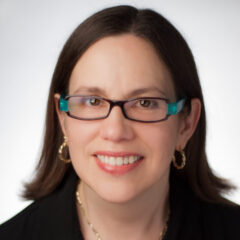 Elena Fuentes-Afflick, MD, MPH, is professor and vice chair of pediatrics, chief of pediatrics at the Zuckerberg San Francisco General Hospital, and vice dean for academic affairs in the School of Medicine at the University of California, San Francisco. Fuentes-Afflick obtained her undergraduate and medical degrees at the University of Michigan and a masters degree in public health (epidemiology) from the University of California, Berkeley. She completed her pediatric residency and chief residency at UCSF, followed by a research fellowship at the Phillip R. Lee Institute for Health Policy Studies at UCSF. Fuentes-Afflick’s scholarly work has focused on the broad themes of Latino health, acculturation, immigrant health, health disparities, faculty misconduct, and faculty development. Her research demonstrated the validity of the “epidemiologic paradox” of favorable perinatal outcomes among immigrant Latina women, reported that the relationship between maternal birthplace and perinatal outcomes varies by maternal ethnicity, and that immigration status influences access to care and perinatal health outcomes among Latina women. She has served in national leadership roles for the Society for Pediatric Research (council and president) and the American Pediatric Society (council and president). Fuentes-Afflick completed a fellowship through the Executive Leadership in Academic Medicine (ELAM) program, served as an ELAM Learning Community Advisor and is currently an ELAM Learning Community Partner. In 2010, Fuentes-Afflick was elected to membership in the National Academy of Medicine and has served on numerous consensus committees, the Membership Committee, the Diversity Committee, was elected to the Governing Council, the Executive Committee of Council, and was appointed Home Secretary. In 2020, Fuentes-Afflick was elected to the American Academy of Arts and Sciences.