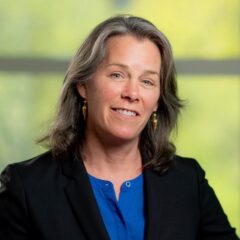 Anya Rader Wallack, PhD, is senior vice president for strategic communications for the University of Vermont Health Network (UVMHN) and chair of the board of OneCare Vermont, a statewide accountable care organization that serves more than half of Vermont’s population in multi-payer value-based payment models. Prior to joining UVMHN, Dr. Wallack was associate director of the Center for Evidence Synthesis in Health (CESH) and a professor in Brown University’s School of Public Health. She served as academic director for the Master’s in Health Care Leadership Program and associate director of the Master’s in Public Health Program.

Dr. Wallack’s served previously in Rhode Island state government as director of HealthSource RI, Rhode Island’s health insurance exchange, then Medicaid Director, and then Acting Secretary of Health and Human Services. She also served in Vermont state government under two governors. She was the inaugural chair of Vermont’s Green Mountain Care Board, a regulatory board with broad responsibilities for cost containment, including hospital rate-setting, health insurance rate review, and payment reform policy. She was special assistant for health reform for Governors Howard Dean and Peter Shumlin, and deputy chief of staff for Governor Dean. While working for Governor Dean, she served as co-chair of the National Governors’ Association Health Policy Committee and as a member of Hilary Rodham Clinton’s Health Care Task Force.

Outside state government, Dr. Wallack has been interim president of the Blue Cross Blue Shield of Massachusetts Foundation, executive director of the Massachusetts Medicaid Policy Institute and executive director of the Vermont Program for Quality in Health Care, a quasi-governmental organization doing health care quality measurement and improvement. Currently she is a member of the board of directors of the Institute for Clinical Effectiveness Review. She chaired the Vermont State Innovation Model Steering Committee from 2013-2015 and was a founding member of the Reforming States Group convened by the Milbank Memorial Fund. Dr. Wallack holds a BA from the University of Vermont and a PhD in social policy from the Heller School at Brandeis University.