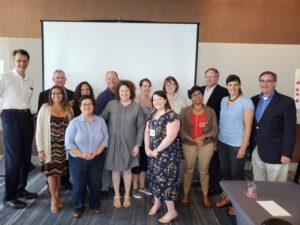 Since its creation in 2015, ELP has become known as a way for up-and-coming individuals from the executive and legislative branches to develop skills that will enhance their effectiveness in today’s complex health policy environment. Modeled after and sponsored by the Fund’s Reforming States Group (RSG), the ELP fosters the same kind of learning and networking experience for young leaders. Individuals are invited by RSG members to participate.

The one-year program included two in-person meetings, two virtual sessions, and being paired with an RSG mentor. The curriculum focused on developing negotiating and communication skills in sessions led and developed by Ken Kizer, MD, MPH, director of the Institute for Population Health at the UC Davis Health System, and Richard Callahan, DPA, professor, School of Nursing and Health Professions, Department of Population Health, University of San Francisco.

The meeting also provided participants with time to network and engage with veteran policymakers from the RSG who shared their experiences and with peers from around the country, who have a  common interest in improving population health.

After the meeting, participants noted that the most helpful aspects of the program were the open interaction between the staff and participants, particularly exchanges with those who have real-world experience in policymaking. They also found great value in connecting with their peers in a safe, bipartisan space, appreciated the self-reflective part of the curriculum, the opportunity for face-to-face meetings with mentors, and the ability to broaden networks. Many inquired about opportunities for program alumni to gather in the future.

“Every developing leader finds out that what got you here won’t get you there,” said ELP participant Michael Costa, deputy commissioner, Agency of Human Services, Vermont Department of Health Access. “ELP gave me new ideas, practical advice, and innovative strategies that I can bring back to my state to help improve the Medicaid program. Perhaps most valuable, ELP connected me with mentors, faculty, and colleagues who know the challenges leaders face today and can help me be successful in the future.”

Elizabeth Roberts, former Rhode Island state senator, who currently serves as consultant to the Fund and is a former RSG member, participated as a mentor.

“The way the curriculum was structured, participants broke into small groups to practice skills like negotiation,” she said. “They not only learned how to negotiate multi-billion dollar contracts or complex legislation, but I could see from their interaction that they were also building relationships that would bring about the sharing of policy and programs across states, especially as the group continues in their careers.”

With an afternoon focused on building communication skills, Roberts noted that policymakers “strengthened their ability to speak to specific audiences—whether that audience is government officials, the press, or, most important, the public. These state leaders are often asked to speak on a health care issue that can be overly complex and politically charged—and they have to make it understandable and relevant to very different audiences.”

Added Roberts, “One of the major reasons the Fund supports this program is so we will have future leaders with the commitment and skills needed to improve population health. One of the goals of the RSG is to inform and inspire state leaders in health care. This group of emerging leaders inspired me.”