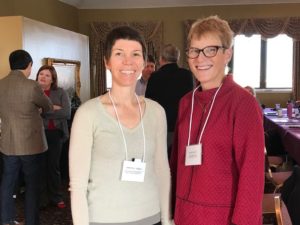 2018 was a major year for state leadership change. Nearly 82% of all state legislative seats were up for election and elections for governor were held in 36 states.

During three Reforming States Group (RSG) meetings in November and December, attendees from 38 states discussed likely effects of the recent election on state and federal health policy—and the importance of  leadership during these transitions to preserve and advance health policy priorities. The RSG is one of the nation’s only bipartisan groups of health policy leaders from both the executive and legislative branches of state government.

At each meeting—in Portland, Charleston, and Louisville—a national health policy journalist addressed the group of executive and legislative branch officials. In Louisville, Noam Levey, health care reporter for the Los Angeles Times, spoke about some of the topics he’ll be keeping an eye on in the coming year, including prescription drug legislation, Medicaid work requirements, pre-existing conditions, short-term insurance plans, and consumers’ surprise medical bills.

Later in each meeting, after time to reflect and share information, attendees participated in a session, led by Christopher Koller, Fund president, on “The How of Leadership: Leading in Transitions.”

At each meeting, two participants—one each from the legislative and executive branches—led the discussion, offering their perspectives on the transitions they’d been through. The discussion covered areas such as how to lead an agency during a gubernatorial transition and prepare an incoming administration. How do you explain your work to a new legislative leadership?  When you take elected office, how do you advance what is important to you?

At a time of so much transition for states, the Fund prioritized giving state health policy leaders an opportunity to discuss their own leadership transitions—and to strategize and compare notes on what might lie ahead for their own health policy agendas. “We find that policymakers inspire one another—not just on the ground they cover on policy topics, but how they moved their agendas forward,” said Michelle Alletto, program officer at the Fund. “We like to give them an arena—a neutral, bipartisan space—in which to share notes on their successes and challenges—and most important, to explain how they worked as leaders to make things happen.”

“I was struck by the consistent emphasis across all meetings on facts and trust,” said Koller. “Veteran state leaders agreed that in periods of great turnover and uncertainty, it is important to be a reliable resource for objective information. This builds the trust required to advance the issues leaders care about.”