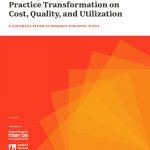 The Patient-Centered Primary Care Collaborative (PCPCC) has released a new evidence report, “The Impact of Primary Care Practice Transformation on Cost, Quality, and Utilization,” that assesses recent research on the effects of the patient-centered medical home (PCMH) and other forms of advanced primary care on population costs and quality of care. The report, published with support from the Milbank Memorial Fund for the fourth time, highlights findings from 45 newly released peer-reviewed reports and additional government and state evaluations.

Authored by the Robert Graham Center and summarizing studies published between November 2015 and February 2017, the report found that the concept of PCMH has evolved and new models of high-performing primary care are emerging. Analysis of the recent studies also revealed that the longer a practice had been transformed, and the higher the risk of the patient pool in terms of comorbid conditions, the more significant the positive effect of practice transformation, especially in terms of cost savings.

The report differs from those in past years because researchers employed broader search terms and more rigorous search criteria in their assessment of studies, reports, and evaluations. It also features examples and data from PCMH programs; the Comprehensive Primary Care Initiative launched by the Center for Medicare and Medicaid Innovation; and state primary care initiatives, including Colorado, Minnesota, and Oregon.