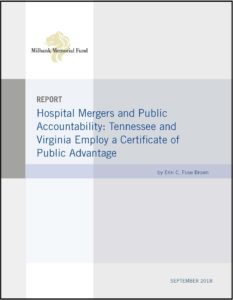 How are states responding to the growing trend of hospital system mergers? As health care consolidation increases, policymakers have to reconcile growing evidence that most consolidations raise prices with the political pressure regulators face to approve these mergers. Several states have responded by issuing certificates of public advantage (COPAs), a legal mechanism through which they can approve mergers that reduce or eliminate competition in return for commitments to make public benefit investments and control health care cost growth.

State COPAs may be a reasonable public policy response to economic forces, but also require state regulators to take major responsibilities for ensuring they work properly.

This report, written by Erin Fuse Brown of Georgia State University College of Law, describes the experience of regulators in Tennessee and Virginia as each addressed a hospital system merger that spanned their state borders, how they worked together, the elements of each state’s COPA, and the challenges they faced. State health policymakers and other stakeholders can learn from what happened in Tennessee and Virginia, as they address future proposed hospital system mergers.