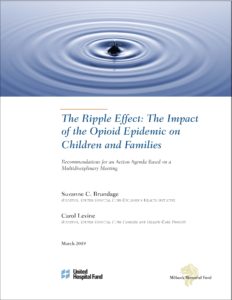 Opioid addiction is well recognized as a national crisis, but its impact on children and adolescents whose parents are addicted has received little attention. A new report published by the United Hospital Fund (UHF), with support from the Milbank Memorial Fund and the Alfred P. Sloan Foundation, makes clear that the magnitude of the epidemic’s impact is much greater than realized. Even if the opioid epidemic were stopped cold today, there would be damaging ripples far into the future.

Titled The Ripple Effect: The Impact of the Opioid Epidemic on Children and Families and written by Carol Levine and Suzanne Brundage, the report is based on extensive research, interviews, and a literature review by UHF staff, as well as a two-day meeting hosted by UHF in October 2018 that brought together national and local experts in child development, family policy, addiction treatment, child welfare, and state and local government officials.

While previous reports have examined aspects of the impact on children, such as pregnant women who use drugs or the increased numbers of children who enter foster care, this is the first comprehensive look at the successive waves of loss and trauma experienced by newborns, young children, adolescents, and their families. It also looks at the needs of kinship caregivers, typically grandparents who often step in to care for these children.

Recognizing the multigenerational impact of the opioid epidemic is one of the Reforming States Group’s focus areas this year.

“We have learned from past epidemics and public health crises that their effects extend far beyond the patient,” said Milbank Memorial Fund President Christopher F. Koller. “This study documents both those effects and what can be done to respond to them. We hope it will inspire coordinated, evidence-informed responses from officials at all levels of government across health, social services, law enforcement and other agencies and their partners.”