What Massachusetts Learned from Colorado about Marijuana 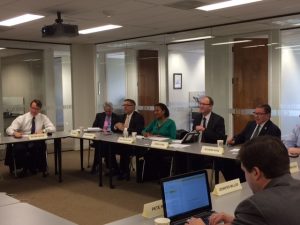 In late July, Massachusetts signed a revised marijuana bill into law. The legislation was a long time coming, and ended two-and-a-half years of work by legislators. That work included a trip, in early 2016, by eight Massachusetts state senators who flew to Colorado to learn about the state’s experience as the first to legalize recreational marijuana. The trip was organized and funded by the Milbank Memorial Fund, which offers State Technical Assistance to state leaders so they can meet with their peers from other states to learn about effective and successful programs.

The work of the senators began in early 2015, when Senator Stan Rosenberg, president of the Massachusetts Senate, appointed Senator Jason Lewis as chairman of a special committee to explore the policy ramifications of legal recreational sales in Massachusetts. Senate President Rosenberg anticipated that a November 2016 ballot question to legalize marijuana sales could drive a robust marijuana policy conversation and debate in Massachusetts and wanted the state Senate to be prepared.

To get a thorough understanding of how another state regulates and controls marijuana use, the Massachusetts special senate committee contacted the Fund and asked to meet with their peers in Colorado. The Fund organized a four-day trip to Colorado for meetings with legislators, staff from the governor’s office, industry participants, and officials in banking, public health, and agriculture—and also included a teleconference with officials in Washington state.

“These meetings were excellent and I commend our colleagues in Colorado for their willingness to participate in several long, detailed, and technical conversations about the pros and cons of marijuana legislation,” said Senator Lewis. “After nearly a year’s worth of research, we knew that marijuana policy was complex—but we were still surprised by the scope and breadth of the issues that had arisen as Colorado implemented their ballot law. We found we still had a lot to learn about issues beyond the nuts and bolts of licensing this industry, issues as diverse as pesticide regulation; licensing the hemp industry; impacts on municipal governments; tackling questions of tribal sovereignty; and how quickly we needed to act in getting good data, among many other things. Our trip to Colorado was critical in helping us develop the expertise we needed to complete a policy report, educate our colleagues, and prepare to do our job as legislators when the policy questions came before us.”

In November 2016, Massachusetts residents voted in favor of legalizing recreational sales, requiring the Commonwealth to create a new regulatory body in short order. While the ballot question contained important provisions protecting the public health and safety, critical gaps remained. Informed in part by the work of the senate special committee, the legislature created a new standing committee to swiftly review the ballot question, engage with residents, and prepare legislation. The marijuana bill that was recently signed into law in Massachusetts reflects knowledge picked up by senators on the trip, said Senator Lewis.

The bill provides several protections, including empowering the regulator to restrict potent edibles and to study the potency of other products; robust data collection, monitoring, and analysis (which began earlier in the year); appointment of a public health champion to the regulatory body; tight labeling and packaging provisions; and a prohibition on marketing that reaches an audience composed of less than 85% adults. Also included are a voluntary pre-market product review process based on a similar review in Washington state to ensure a product is not especially appealing to children, and an increased excise to help provide resources for public health and safety education campaigns, mental health services, and necessary municipal costs.

“We were able to secure a number of public health priorities, and our work was greatly aided by the Milbank Memorial Fund’s assistance in bringing us out to Colorado,” said Senator Lewis. “When the time came for action and debate in the State House, the legislature had built up a knowledge base that allowed us to feel confident we were making strong decisions in the best interests of our constituents. We have much to keep an eye on as this agency and industry mature, but we have got off to a strong start and we’re appreciative of the Fund’s help in getting us there.”