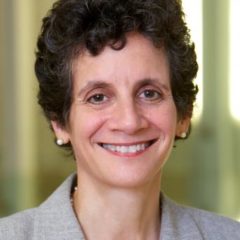 Sherry Glied was named dean of New York University’s Robert F. Wagner Graduate School of Public Service in 2013. From 1989-2013, she was professor of health policy and management at Columbia University’s Mailman School of Public Health. She was chair of the Department of Health Policy and Management from 1998-2009. On June 22, 2010, Glied was confirmed by the US Senate as assistant secretary for planning and evaluation at the Department of Health and Human Services, and served in that capacity from July 2010 through August 2012. She had previously served as senior economist for health care and labor market policy on the President’s Council of Economic Advisers in 1992-1993, under Presidents Bush and Clinton, and participated in the Clinton Health Care Task Force. She has been elected to the National Academy of Medicine, the National Academy of Social Insurance, and served as a member of the Commission on Evidence-Based Policymaking. Glied’s principal areas of research are in health policy reform and mental health care policy. Her book on health care reform, Chronic Condition, was published by Harvard University Press in January 1998. Her book with Richard Frank, Better But Not Well: Mental Health Policy in the US since 1950, was published by The Johns Hopkins University Press in 2006. She is co-editor, with Peter C. Smith, of The Oxford Handbook of Health Economics, which was published by the Oxford University Press in 2011. Glied holds a BA in economics from Yale University, an MA in economics from the University of Toronto, and a PhD in economics from Harvard University.