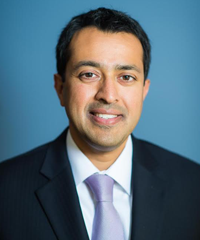 Anand K. Parekh is a senior advisor at the Bipartisan Policy Center. Previously, he completed a decade of service at the US Department of Health and Human Services (HHS). As deputy assistant secretary for health from 2008-2015, he developed and implemented national initiatives focused on prevention, wellness, and care management. Briefly in 2007, he was delegated the authorities of the assistant secretary for health overseeing ten health program offices, the US Public Health Service and Commissioned Corps. Earlier in his HHS career, he played key roles in public health emergency preparedness efforts as special assistant to the science advisor to the secretary. Parekh is a board-certified internist, a fellow of the American College of Physicians, and an adjunct assistant professor of medicine at Johns Hopkins University. He has provided volunteer clinical services for many years at the Holy Cross Hospital Health Center, a Maryland clinic for the uninsured. A native of Michigan, he serves on the Dean’s Advisory Board of the University of Michigan School of Public Health. Parekh received a BA in political science, and an MD and MPH in health management and policy from the University of Michigan.