Leading a Medicaid Program During the COVID-19 Public Health Emergency: Reflections on My Experience and Ways to Support State Medicaid Leadership 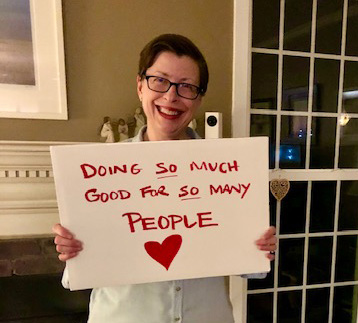 Kate in a photo distributed to Connecticut’s
Medicaid staff in April 2020.

Several months after leaving her position as director of Medicaid and CHIP in Connecticut, Kate McEvoy offers thoughts on the privilege and challenges of leading a Medicaid program that served almost a quarter of the residents of Connecticut during the COVID-19 pandemic — and suggests ways that federal and state officials can support Medicaid directors.

What was it like to be a Medicaid director during the COVID-19 public health emergency? First, there was an all-too-slow dawning realization. Then a huge wave of activity, followed by just enough critical distance for some observations. Now, deep fatigue.

In mid-February 2020, the Connecticut legislature held a major hearing on elimination of religious exemptions for childhood vaccinations, attended by several thousand opponents. I, too, was in the building that day, accompanying the Connecticut Department of Social Services commissioner to an unrelated hearing in my role as the state’s Medicaid director. The next week, I had an intense but brief illness that included a high fever and chest pain. I felt sick enough to miss two days’ work — unusual — and despite the reports of something emerging in Washington state, I had no idea what had made me sick. Now I believe that it was COVID-19.

In the same way that I was unable to associate those symptoms with COVID, I had no idea what was to come for our program.

The first federal public health emergency declaration was made on March 13, retrospective to January 1. It immediately surfaced dim recollections of my peers’ experience with hurricane-related Section 1135 waivers in Florida (Beth Kidder) and Arizona (Jami Snyder). I thought about the nursing home “mutual aid plan” — standing agreements for sharing staff and resources and sheltering residents displaced by disaster — that our prescient Connecticut nursing home associations had championed and put into place. I had a passing thought that we would have to expand our modest foray into telehealth.

But at that moment I failed to grasp the enormity of what would soon become an imperative for us all. You truly don’t know what you don’t know.

A wave of infections emerged early in our state. In Connecticut, as in so many other states, the shutdown meant that, all of a sudden, people couldn’t access their Medicaid services. As a result, everyone from babies in need of Birth to Three autism services to older adults, as well as people with disabilities who rely on in-home supports, was at risk of loss of care.

Along with all our peers, our Medicaid agency pivoted at a pace that we had never experienced to create new systems for telehealth, testing, and ultimately vaccine administration. We leapt on the Center for Medicaid and CHIP Services (CMCS) authority to enable access to a broad range of virtual services used by people across the age continuum — by video and phone and in a range of settings. We created a team that included our public health agency peers and the Long Term Care Ombudsman Program, which partnered with several nursing homes to create COVID-19 recovery facilities. I will never forget my Sunday afternoon calls with those inspired and tireless folks.

We designed and stood up an extensive array of health center–based and pop-up testing and vaccination sites and created entirely new systems to distribute federal Coronavirus Relief Funds. Our IT staff helped convert an almost entirely office-based state workforce to remote operations in a logistically miraculous matter of weeks. There were frequent meetings with our legislative leadership and the committed membership of our Medical Assistance Program Oversight Council. These discussions kept cross-branch communication going, which was critical at a time of unprecedented use of emergency and executive authority.

Meanwhile, we kept working hard on pre-pandemic reform initiatives. Notably, this portfolio included a public-private partnership (including state agencies, the UConn Center on Aging, the Connecticut Coalition to End Homelessness, the Corporation for Supportive Housing, and the Partnership for Strong Communities) through which we established statewide Medicaid coverage of transition and tenancy-sustaining services, paired with newly appropriated housing vouchers, for members experiencing homelessness and an often-vicious cycle of hospitalization, short-term placement in nursing facilities, and then discharge to shelter settings. This effort — dubbed the Connecticut Housing Engagement and Support Services Initiative (CHESS) — was approved by CMCS in August 2021. It was one of the most wonderful moments of my career.

The pace was relentless. We were on seven days a week. I would often wake up in the middle of the night sure that I had missed something essential in the torrent of email about public health emergency state plan amendments and waivers, gubernatorial executive orders, communications with provider associations, and so much else. I frequently felt as if I was losing ground. But there wasn’t time to dwell on that.

While it was hard to explain to the average person (or even my spouse!) what we were doing or why we were working so hard, that is nothing new for the countless civil servants who quietly and capably make government run.

And Connecticut was anything but unique. All state and territorial Medicaid agencies engaged in the same herculean array of work. We all did so because it was necessary.

Around late August 2020, lower rates of infection buoyed hope. The brief reprieve gave us a bit of distance to think and evaluate. While gaining perspective remains a work in progress, here are a few observations:

While I think it is essential to speak about how tired and spent everyone is, I am also hesitant. As a long-serving Medicaid director, I can affirm from experience that these positions give the people who serve in them remarkable privileges in influencing the health, economic security, and well-being of millions of people. Plainly put, this work is thrilling and embodies the very best aspects of why so many of us enter civil service. But a subtext suggests that talking about some of the more challenging realities of the experience is inappropriate.

I can think of so many instances and people who exemplify the impact of our program to me. The evening that I spoke to a large group about our Medicaid expansion, a woman approached me afterward, with tears streaming down her face, to say that coverage had kept her from financial catastrophe after she was diagnosed with muscular dystrophy. A colleague and friend with developmental disabilities, who self-directs her services under Medicaid’s Community First Choice option, acts as moderator for the resident-designed housing cooperative in which she lives. Another woman I correspond with sought and received treatment for substance use disorder and now brings her lived experience to walking alongside others as a peer support.

I was also able to witness the longitudinal impact of implementing a self-insured, managed fee-for-service model in Connecticut, which streamlined and simplified the entire Medicaid experience into a uniform statewide model that improved quality outcomes and dramatically decreased costs.

Seeing both the individual and systemic value of this work is precious and rejuvenating, and it constantly reinforces our reasons to show up as our best selves, each and every day.

But Medicaid directors (and commissioners, Medicaid staff, National Guard members, health providers, and the myriad other actors who contribute so greatly on a local level) are very, very tired. Many (including me) have left the service, and continuity of effort in state programs relies too heavily on the remarkable civil service staff. Medicaid staff across the country truly went above and beyond by making all of this happen, tirelessly and willingly. I offer specific and heartfelt thanks to everyone in the Connecticut Department of Social Services Division of Health Services, eligibility policy, legal and finance staff, and countless partners. But on the heels of the enormity of that set of experiences, many states have already experienced the loss of their Medicaid director and are anticipating waves of retirements of state personnel, with few levers to prevent that phenomenon.

I was so tired and overwhelmed that I couldn’t truly recognize my exhaustion until one day last summer. To her great credit, Anne Marie Costello, acting director of CMCS, engaged a consultant to solicit feedback about states’ experience with the agency. The structured interview was comprehensive and thoughtful. Most significant for me was the last question: “Is there anything else that you would like to share that we haven’t touched on?” In response, I started to say how grateful I was for all the federal support, but instead I burst into tears and had great difficulty recovering. It was a stunning revelation of how much had been bottled up.

The National Association of Medicaid Directors already provides a great deal of support to directors. Its director-only, association-wide calls and connections, as well as leadership support, are extremely meaningful, and I send deep thanks to the association staff and many peers who buoyed me and all of us in myriad ways. All of you are in my heart. The Center for Health Care Strategies has also greatly contributed through the Medicaid Leadership Institute and its state-specific academies, which help to draw in and elevate rising leaders among the civil service staff. But more needs be done.

Given the significance of the work and enormity of the challenges, what can federal and state government leaders do now to support Medicaid directors and their agencies? I offer these suggestions:

It was the privilege of my lifetime to serve as a Medicaid director, and I don’t know a single Medicaid director who wouldn’t say the same thing. (Watch this powerful NAMD video that profiles leading directors in their own words.) That said, understanding our experiences and challenges during this unprecedented time is crucial to promoting the current and future success of Medicaid leadership.