How Well Does State Supervision of Hospital Mergers Work? 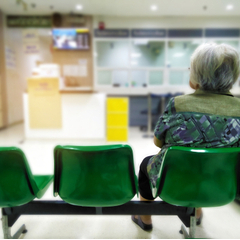 Certificates of public advantage (COPAs) are being used by some states to displace antitrust enforcement with state supervision of hospital mergers. On June 18, the Federal Trade Commission (FTC) held a workshop to study the use of COPAs and consider how they fit within a broader menu of policy options to address health care consolidation and costs. A COPA is a legal mechanism that allows states to approve mergers that reduce or eliminate competition in return for commitments from the hospital to make public benefit investments and control health care cost growth. (Two Milbank publications examining COPAs — report on the Ballad Health COPA in Tennessee and Virginia and a policy brief on the aftermath of North Carolina’s repeal of its COPA statute and termination of the Mission Health COPA — offer policy guidance based on these state experiences.)

The research presented at the FTC workshop gave a mixed picture of COPA’s impact on price and quality, and the experiences of states highlighted the importance and difficulty of sustaining COPA supervision over the long term. Nevertheless, COPAs remain a policy tool that states may resort to in order to address a mix of rural health care challenges.

A mixed picture of COPAs’ effectiveness

COPAs can constrain inpatient price increases by a hospital monopoly in some circumstances, according to empirical studies conducted by academic and FTC economists that were presented at the FTC event. However, if the COPA is repealed or the state fails to conduct active supervision, hospital prices spike and quality may suffer.

Leemore Dafny of Harvard Business School underscored the need for more research to evaluate the effect of mergers with state COPA oversight on a broad range of metrics, including overall spending, quality, access, and the labor market. States and researchers will need granular data to study all these dimensions, such as from an all-payer claims database.

The best choice for any hospital market in terms of prices and quality is effective competition, according to economist Gregory Vistnes. However, some markets, particularly in rural areas, may not be able to sustain effective competition. In those areas, a COPA may be a second-best alternative that can protect against price increases while improving quality and access. The evidence suggested that worst outcome is an unregulated health care monopoly. In other words, whether a COPA is a “good idea” as a matter of policy depends on what you’re comparing it to: COPA oversight may not perform as well as effective competition, but it may be preferable to an unregulated monopoly. 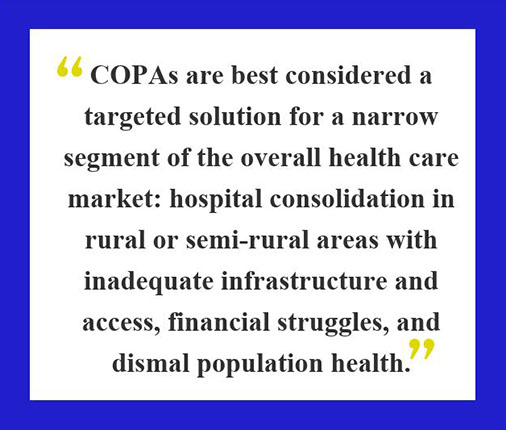 If a state does undertake a COPA, it should commit to stringent and continuous supervision over the hospital monopoly in perpetuity or until effective competition enters the market, presenters said. States should expect that initial post-merger changes may undermine health care quality and access and result in loss of jobs or depressed wages for those employed by the health care entity. They can also anticipate that COPAs will convert state officials charged with overseeing the health care system into referees for every health care contract or business dispute, employment change, reduction of access, or population health challenge that arises in the area.

State experiences indicate that intense political pressure is exerted on the state officials charged with COPA oversight, which increases the risk is that everyone involved may tire of the COPA and seek to terminate state oversight or repeal the COPA statute altogether.

While there was skepticism at the workshop about whether COPAs could stave off the negative effects of consolidation over the long term, there was widespread agreement that the possibility of an unregulated monopoly following COPA repeal poses a serious threat to public welfare and that steps should be taken to avoid it. Drawing on North Carolina and Montana’s experience with COPA repeal, Tennessee, for example, included “survival provisions” in their Ballad Health COPA that extend price caps and other key protections even if the COPA is terminated or the COPA statute is repealed.

States therefore face considerable challenges when they undertake COPAs, and the greatest challenge may be sustaining the political will to maintain the long-term, active supervision required for COPAs to protect against the harms of an unfettered hospital monopoly.

As the Urban Institute’s Robert Berenson described at the workshop, there are an array of policy approaches to address the larger problems of health care consolidation and rising costs, ranging from market approaches — such as reducing barriers to entry and price transparency — to more comprehensive regulatory approaches, such as price caps, all-payer rate setting, or global budgets. COPAs are a form of regulatory intervention, but instead of statewide regulation they target a particular hospital monopoly for oversight.

COPAs are best considered a targeted solution for a narrow segment of the overall health care market: hospital consolidation in rural or semi-rural areas with inadequate infrastructure and access, financial struggles, and dismal population health. In these markets, the existing competition may be unsustainable or unsuccessful in solving regional challenges, so states turn to COPAs to allow hospital consolidation to support financial stability in exchange for providers’ commitments to invest in population health and infrastructure.

COPAs may be risky and challenging, but states that adopt COPAs have a far better chance of success when they draw on empirical research, the experiences of states that have attempted COPAs before, and a candid discussion of helpful strategies and pitfalls. Given the challenges of sustaining supervision over one health system monopoly, states should also consider broad-based policy options to address health care consolidation.  The FTC’s workshop on COPAs provided a needed forum for this valuable exchange.