Health Care Costs—Mapping the Forest and Finding a Path

All these features can and should attract the attention of researchers and policymakers seeking a more cost-effective health care system. But excessive attention to any one component will blind us to the bigger view. Some recent contributions to the health services research literature help us see the forest through the trees a bit better and make the case that the private health insurance part of the jungle is the most dangerous. Fortunately, some states are already finding their path through it.

First, Anderson and colleagues in a January 2019 Health Affairs article argue persuasively that the US continues to pay more per capita for health care than other countries because of higher provider prices, not excessive utilization. Because Medicare and Medicaid set their prices, they argue that the area for policy focus should be what private health insurance pays providers.

Cost concerns for Medicare and Medicaid remain real—just ask state and federal budget officials trying to make their numbers work. But if Anderson and Cooper and their colleagues are correct, in the future these costs will be driven by increases in the number of people enrolled, not by per capita trends.

A narrative starts to emerge here—a view of the forest. Providers—especially those with negotiating leverage—take advantage of the confidential negotiating process with commercial insurers to obtain higher prices for their services. Insurers, seeking to keep providers in their network, concede to higher levels and higher rates of price increases than Medicare or Medicaid and pass those costs on to employers. Rising pharmaceutical expenses accelerate these increases. Employers, seeking to manage their expenses, adopt product designs that push more costs onto employees. For even these reduced benefits, employees forfeit wage gains and either reduce their utilization of health care services, reduce other expenses to pay for health care, or go into medical debt.

When confronted with this behavior, institutional providers point to alleged underpayments by Medicare and Medicaid—the “cost shift” argument. This ignores the fact that commercial hospital rates as a percentage of Medicare vary both across the country and in the same market. Ongoing studies by the Division of Health Care Financing and Policy in Colorado indicate that excess commercial payments in that state do not fund any public payer shortfalls, but instead support higher administrative costs, higher hospital margins, practice acquisition and building costs. Repeated analyses by independent health economists have come to the same conclusion.

In private negotiations, leverage matters, and costs rise to the level of revenue available.

It does not have to be that way. Finding a path out of this jungle of provider pricing for commercial health insurance, however, will fall to the states and not the federal government. Analysis from the Health Care Cost Institute shows that metropolitan Baltimore in Maryland, the only state with all-payer hospital rate setting (a practice given up by other states in the 1980s in the wake of Ronald Reagan’s assertion that government was the problem, not the solution), enjoys lower overall provider prices for commercial insurance for a similar bundle of services than any other market in the country. (See Figure One).

Figure One: Average Provider Prices for a Similar Bundle of Services

Not surprisingly, a study of total costs of private health insurance in six markets by the Network for Regional Health Care Improvement showed Baltimore to be the cheapest among them. Analysis by federal officials last year indicates these low commercial rates are not subsidized by higher Medicare and Medicaid costs. As for the effects on quality and innovation, Maryland’s all-payer rate-setting structure supports an internationally known academic medical institution in Johns Hopkins and hospitals that are systematically weaning themselves from fee-for-service payments. Vermont’s statewide all-payer accountable care organization (OneCare), when fully implemented, is envisioned to be a northern version of Maryland’s effort.

When I was Health Insurance Commissioner in Rhode Island we documented the same provider price dynamic noted by Cooper—but all-payer provider rate setting was a bridge too far, and we were impatient. States can follow Rhode Island’s lead and use insurer rate regulation to limit provider rate increases and bend the commercial insurance trend (Figure Two)—giving the savings back to employers in lower increases in premiums, to employees in lower cost-sharing, and to the delivery system in primary care investments.

Figure Two: Commercial Insurance Payments (per person per quarter) in Rhode Island vs a Matched Comparison 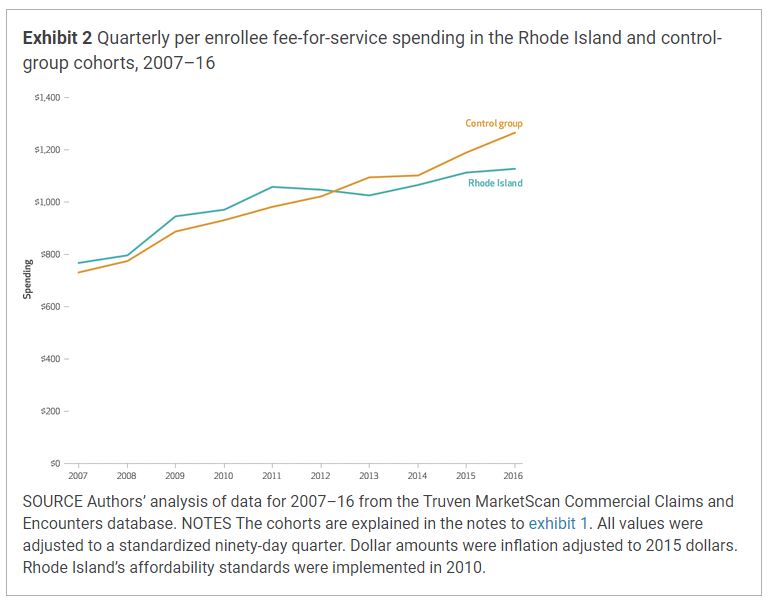 And if full-on rate regulation is not acceptable policy, how about a little daylight? Insurers and providers alike zealously guard the secrecy of their rate negotiations but the proliferation of all-payer claims databases make their outcomes publicly available if leaders are willing to analyze and communicate them and deal with the howls of outrage from proponents of the status quo. The Attorney General in Massachusetts and the Health Insurance Commissioner in Rhode Island informed and activated their states’ employers regarding the excess prices they were paying providers with good public reporting that named names. Now officials in Colorado, Montana, and Delaware are doing the same.

We pay more for our health care in the US because we pay our providers more—especially in commercial insurance and to our hospitals and hospital-affiliated providers. It is logically inconsistent and socially costly that half of the financing for our health care system relies on transparent, publicly administered pricing, while the other half is shrouded in secrecy. If employers, employees, and public officials really think their money could be better spent elsewhere, they must be willing to illuminate the “jungle” of provider pricing for commercial insurance and then map the forest for a path out.