Their Pain, Our Gain

Hey, health care industry (all of us, payers, providers, industry hangers-on) are you paying attention to what’s happening in our public schools? How public school teachers in West Virginia, Oklahoma, Kentucky, and Arizona have had to resort to public protests and walkouts to draw attention to poor funding levels in their states? How spending cuts have led to four-day school weeks, crowd-sourced school supplies, and schools with leaky roofs and busted furnaces?

We should be paying attention because their pain is our gain.

Health care spending was 13% of the US economy in 1995. By 2020, the federal government estimates that it will be 20%. One of every five of us in the United States will be feeding at the health care trough.

It is not hyperbolic to accuse those of us in health care of “wage theft:” creating the stagnating wages that have sent teachers to the streets. Since 2010 alone, health care insurance premiums have increased at two-and-a-half times the rate of wages, and deductibles have increased seven times faster than wages.

For the public sector, this growth has been at the expense of education in particular. According to the National Association of State Budget Officers, health care’s (Medicaid’s) share of state budgets grew from 20% in 1995 to almost 30% in 2017, while elementary and secondary education’s share decreased by two points.  (See Figure 1.) 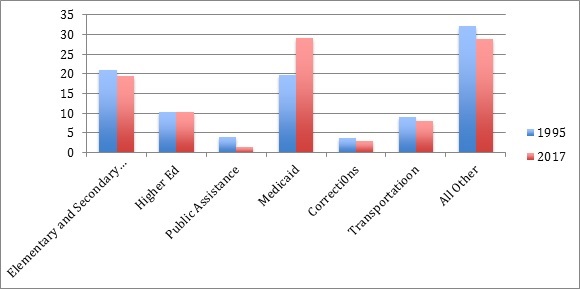 In fairness, two-thirds of the Medicaid program’s spending growth in the last 35 years, according to the Medicaid and CHIP Payment and Access Commission (MACPAC), has been due to gains in enrollment, not per person expenses; state programs have been more efficient than the private sector at controlling per person cost growth. Rather, our economy and politics are making more people poor and putting them on Medicaid; spending more on health care and less on education will exacerbate this dynamic.

However, health care services remain supply driven—the more we have, the more we use. There is money to be made in health care—in pharmaceuticals, outpatient care, and diagnostics—and private capital has flowed there, creating a not-so-virtuous cycle of more supply, more care, and more expenses for the private and public sectors with little attributable gains in population health.

There is no money to be made in education, by contrast. It relies primarily on public spending, not private capital. Stories from public school teachers recently published in the New York Times illustrate the environment we have created for them and for students.

“The district skipped textbook adoption for the high school English department, leaving us with 10-year-old class sets, and we do not have enough for students to take them home. Our students deserve better. Our nation deserves better.”

“I had six laptops for 42 fifth-grade students (in one classroom) with many broken keys and chargers. My students were supposed to use these to prepare for their state test, which required typing multiple paragraph responses. I crowdfunded to get 10 Chromebooks with all the keys on the keyboard, so they could learn to type on a machine that works.”

“I personally have to work several additional jobs to survive and support my veteran husband. We live in a modest house, I drive a 15-year-old car, and despite all of that, even with my master’s degree, some months we are not food secure.”

The problems created by an underfunded education system will end up in doctors’ offices and ERs: kids with behavioral problems caused by toxic stress; high school dropouts with risky behaviors; underemployed adults with chronic conditions caused by living and working environments that do not support healthy behaviors who then delay treatment because of underinsurance.

As professionals who understand the effects of the social determinants like housing, employment, and education on population health, we cannot simply blame a weak educational system on legislative politics that raise insufficient revenues or allot them in ways that disadvantage poorer communities. It is also insufficient merely to call attention to the underinvestment in social services.

We must acknowledge what Don Berwick, president emeritus and senior fellow at the Institute for Healthcare Improvement, labels as the health care economy’s “confiscatory” role in creating the crisis in public education financing. Every extra dollar—whether from Medicaid, Medicare, public employee systems, or private employers—spent on a breakthrough drug, a consolidated health care system, a diagnostic test, or a health care consultant is one that could be spent on textbooks, teacher salaries, or a leaky school roof.  These are questions of policy priorities and values. Does an orthopedic surgeon really provide ten times more social value than a teacher, as average starting salaries would indicate?

Even if we acknowledge health care’s complicity in the educational financing crisis, our first impulse may be to ask for more money to help fix the problem—nurses to make home visits, community health workers to make social service connections, or behavioral health therapists to employ in primary care.

But perhaps we need to advocate for more guardians against ourselves and our dangerous impulse to fix the problem we helped create and to grow our industry in general. Measures such as more aggressive antitrust oversight, tighter approvals for new drugs, technology and service expansion, commercial insurance rate review, and global budgeting may all be necessary to curb the health care beast.

This would require potentially advocating against our self- or institutional- interests. It would call for a stronger role by government, which is hardly fashionable these days. But many of us were drawn into health care precisely because of the sense of purpose provided by the chance to help others—to participate in the healing and caring process and to help build systems that meet the needs of populations. Doing well while convincing ourselves we are doing good has made that charitable motivation easier to maintain.

That same impulse to help should allow us to look in the mirror and acknowledge the damage a malnourished public educational system does to our kids, a system that health care has helped to starve.