Back to President’s Blog: The View from Here

A couple of years ago, a graduate school professor with deep and senior health policy experience at the state and federal levels looked at me with raised eyebrows and asked, “Does state health policy even matter?”

He was being provocative, implying that federal policies, large socioeconomic factors, and parochial politics could all swamp the well-intentioned efforts of earnest state-level bureaucrats. His question has proven prescient given the sudden ardor Washington policy types have for “state health care innovation” and the attention lavished on programs that promise to waive federal laws to support these would-be innovators.

New research from the Fund explores my colleague’s question and offers a firm but conditional answer of “yes, state health policy does matter.” Leadership and persistence, however, seem to matter more than the flash of innovative ideas.

Our approach to the research involved a sort of reverse engineering: to see if we could find aspects of population health that had improved in some states, and then ask what had happened. Researchers David K. Jones and Christopher J. Louis of Boston University looked at 20 years of scorecards of state health system performance (from Commonwealth Fund, America’s Health Rankings, etc.) to identify states that made big and sustained gains relative to their peers.

They found that the “big movers” were spread around the country, across the political spectrum, and were not the star students one usually hears about at DC health policy conferences: Florida and Georgia for low rates of infant mortality and Delaware and Iowa for reduced chronic disease burden.

Jones and Louis then interviewed numerous people in those states to learn how these improvements happened and to see if any general lessons emerged. Looking at states that made substantial improvements shifts attention away from the consistent high performers and asks an important question—how does positive change happen? Their findings are summarized here and in this graphic. 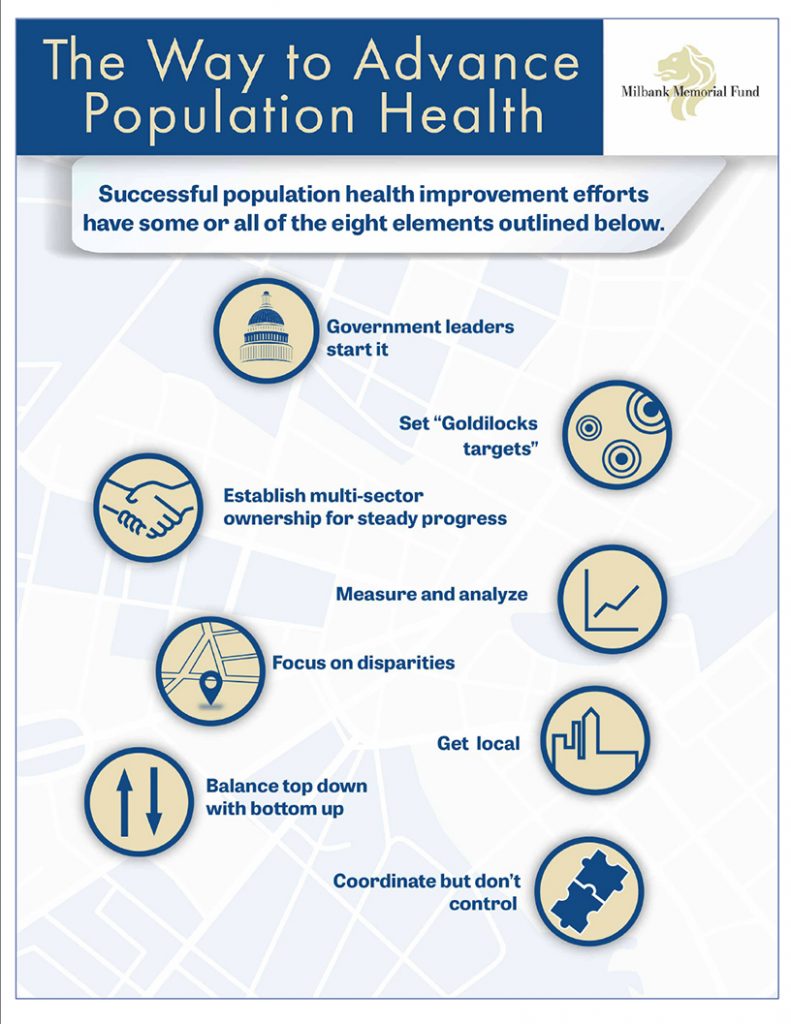 In some ways, these findings are hardly surprising, but that doesn’t detract from their significance. In each case, a state-level government official called public attention to poor performance in the state in a particular area and then spent time, effort, and political capital to align resources to address it. S/he set some aspirational (but attainable) targets, the private sector became engaged, more people got involved, and everybody started working towards the targets and measuring their progress. Eventually, the work and focus became normal—they became “the way we do business.”

The importance of leadership early on resonates with my own experience. My home state of Rhode Island has become a national leader in children’s health care in part because Governor Bruce Sundlun, in the midst of a credit union crisis in the early 1990s, rallied public support for expanded coverage for kids that established RIte Care, the state’s Medicaid managed care program. In the same way, Louis and Jones found that public officials—whether it was Georgia Health Department Director Brenda Fitzgerald or Delaware Governor Jack Markell—focused on issues in which their states were performing poorly and where improvement was possible.

More significantly, they also selected issues they personally cared about. This passion made it more likely that they would prioritize work on the topic, and take risks to use their authority and influence to call attention to it.

The findings do not support a “great man” concept of leadership: if they are successful, the leaders’ own importance fades. Those who insist on authority and detailed plans will not get very far. Jones and Louis found that population health improvements were marked by a lot of initiatives—some managed from the top and some started from below—all heading in generally the right direction, with external measurements of progress. In each case, it was a swarm of efforts and laborers, not a single solution.

Simple does not mean easy. The execution of these strategies requires sufficient resources and judgment. How much control is necessary? How to marshal resources? Who are the critical stakeholders and how to align their interests? What is the appropriate political risk? There is no easy recipe or clear technical adjustment to make this sort of progress.

This is also hard work. In each state, the documented improvements in the reports were years in the making. There were opportunities to lose focus when other demands arose, or success seemed uncertain. There are always priorities labeled as “urgent.” When assuming a new post, there is little glory in continuing past efforts. Part of the job of leadership is to ignore the siren call of the new initiative and the latest policy fad, and to encourage others to persist towards a common goal, adjusting efforts as necessary.

The importance of persistence contrasts with much of our national debate on health policy this year, when some federal leaders have blithely assured us that “state innovation” needs to be unleashed on all variety of health care problems—including high Medicaid costs, insurance market instability, and insufficient consumer choices.

This infatuation with the magical powers of “innovation” deflects the responsibility for Congress to deal with its sticky problems: “let the states clean up the mess” may be a more truthful term. In fact, all of the states depicted in the reports relied on federal partnerships—for financing medical care through Medicaid and Medicare, and for programs and technical assistance from the Centers of Disease Control and Prevention—to improve their performance.

Talk of state innovation also offers the hope of some new (and easy and technical) solutions to complex issues. These reports show us, however, that more than innovate, states can persist. Tough problems—like unhealthy infants and high-burden chronic conditions—require focus and steady efforts using all the elements identified by Jones and Louis.


Back to President’s Blog: The View from Here