With the Senate Affordable Care Act (ACA) “repeal and replace” effort collapsing into partisan rubble (how did you learn about the dramatic US Senate vote in the early hours of July 28?), attention will turn to whether and how the states will assemble the pieces of a health policy agenda. A new survey of state legislators may give us some clues and shed insights into what bipartisanship in health policy might actually look like.

The survey was conducted by British researcher Christina Pagel and co-sponsored in part by the Commonwealth Fund and the Milbank Memorial Fund. Its findings are summarized in a recent op-ed published in the American Journal of Public Health. Pagel asked state legislators who are active in health and finance committees to rank 13 possible goals for US health care policy. The goals were refined with feedback from legislators to cover a wide range of options and to be neutral in tone. The results were compared, analyzed, and mapped using complex multi-dimensional calculations.

Republicans and Democrats really do have different goals for government policy in health care, Pagel finds. Those differences stand up across regions, legislative assemblies (House and Senate), and committees of jurisdiction—and can be mapped in revealing ways. Figure 1 summarizes the survey results of the 376 respondents—values further to the right are more important—and groups the goals into clusters suggested by an analysis of the rankings. 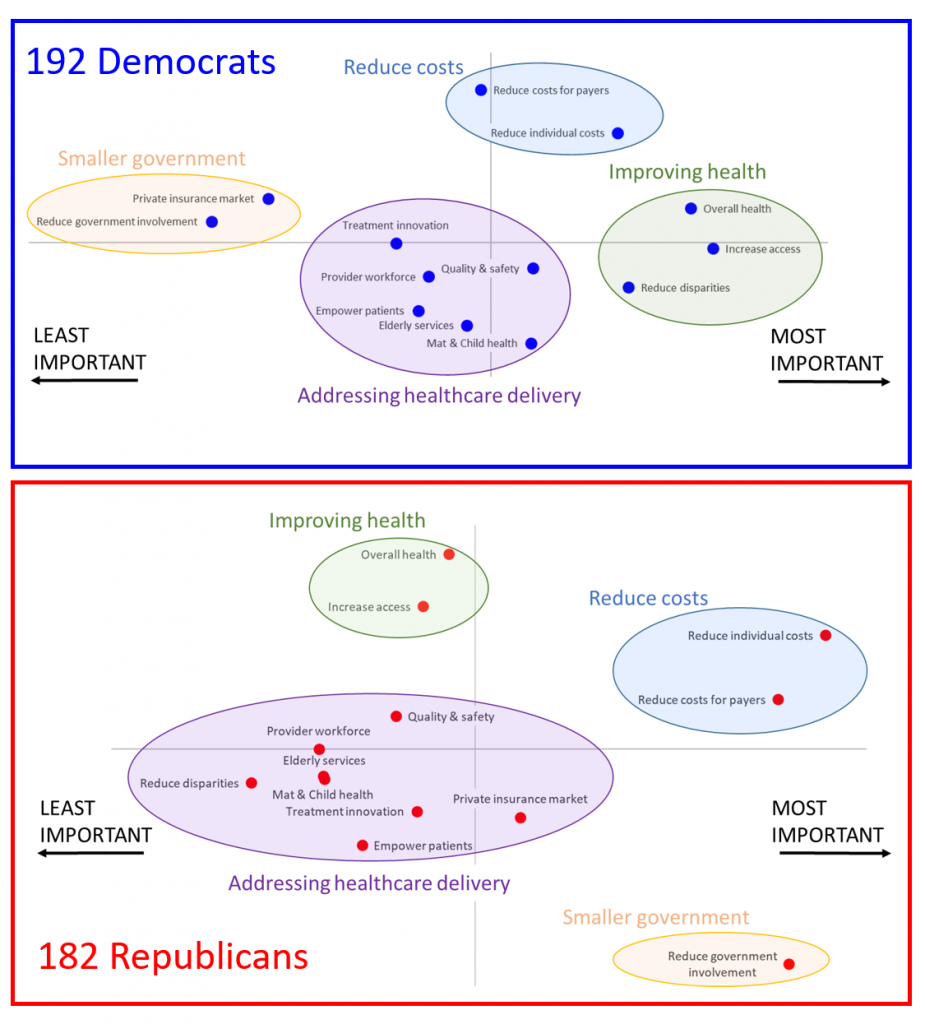 Republicans placed their highest priority on reducing costs— both for individuals and for public and private payers.  True to their principles, they also placed a very high priority on “Reduce(d) government involvement in providing health care and increased free market competition.” In Figure 1, the distinct position in the lower right-hand corner of “reduced government involvement” indicates it is a separate goal for respondents, not a means of reducing costs.

Democrats also hew to their principles and favor more ambitious and communitarian goals for US health policy that relate to improved collective well-being, including increasing access to affordable health care, reducing disparities in health status and outcomes, and improving the overall health of all Americans. These values, unlike those of the Republicans, all cluster together in Figure 1.

Like a good map, Figure 1 depicts the reality of the characteristics of a particular setting. We may wish we could change it, but different people really have different priorities and want different things from health policy.  No amount of shouting will make a strong Republican less skeptical about what government can accomplish or make a solid Democrat embrace unrestricted free market practices to allocate what they believe to be a fundamental common good. We would do well to understand this reality rather than wish it away.

And like a good map, Figure 1 tells us how to navigate the terrain to get where we need to go.  For progress to occur in an environment with divided political power, other values must be acknowledged and considered; compromise is essential.  ACA architects thought they were doing this when they co-opted Republican Governor Mitt Romney’s Massachusetts plan as their own.

State officials—operating in a world where money can’t be printed and rhetoric is unmasked—also understand the necessity for compromise in health care.  So states like Arkansas and New Hampshire use Medicaid funds in a “private option” to buy commercial health insurance for newly eligible populations; Indiana expands Medicaid with benefits that look like commercial plans; and Tennessee and Arizona bulk up their Medicaid administrative capacity to run their programs more effectively.

The study also makes clear that common ground can be found in everyone’s concern with the costs of health care. This concern is more easily named than acted upon, however.  Public education on an issue as challenging as health care economics is difficult. Shifting costs to others—patients, providers, or payers—is easier than reducing costs. Saying no to providers or patients is never easy for government officials. Finally, promises to reduce costs are easy to make and hard to deliver. “I can’t afford to save that much money,” said a frustrated governor when confronting numerous requests from providers looking for upfront “investments” that would purportedly save the state much more in the future.

Challenging or not, health care costs are where the action will be, as Pagel’s survey makes clear. This has already come home to roost in the individual markets, as states struggle to make them sustainable with an indifferent, ineffectual, or willfully oppositional federal partner. The second obvious area of focus for states and health care costs will be Medicaid programs, which continue to crowd out other parts of state budgets.

States with divided power will do the hard work of compromise and public education. They might consider the “private option” for healthy Medicaid enrollees and benefit or delivery system reforms for high-cost populations. The very ambitious may take on the systemic cost drivers of price and utilization, as Maryland and Massachusetts are doing, or the behaviors and social factors that drive costs, like decidedly purple Colorado.

Concerns about costs and access are both legitimate. The lessons from the Congressional foray into health care reform may well be that partisanship is its own dead end. When it comes to health care, legislators may need to see purple. State leaders who acknowledge the reality mapped out by this survey, and roll up their sleeves to get to work on the challenging agenda it sets forth, will be the ones truly serving the public interest.