The game of hot potato ends one of two ways—someone drops the potato as it is being tossed or it finally cools off.  But what happens if the potato stays hot? How long can you get everybody to keep playing catch?  How do you get it to cool off?

We are playing hot potato with health care costs in the United States—shifting them to whomever we can. Some new analyses on health care spending in each state can help us understand more about the challenges we face when we finally focus on reducing costs, not merely shifting them.

The debate generated by the American Health Care Act (AHCA) has been a crash course for the public on health care costs and the appeal of cost shifting. Want to make insurance on the exchanges more affordable?  Just toss that health care cost and get somebody else to pay. To reduce the federal bill, Congress is considering decreasing government tax credits and cutting Medicaid.

Employers routinely shift costs to their employees to give them “skin in the game.” We also toss the cost potato to providers and individuals when we cut Medicaid’s provider rates, eligibility qualifications and benefits—increasing bad debt and uninsured rates. Providers, in turn, shift costs among payers: Medicare, private insurance, and Medicaid pay different prices for the same services, much like passengers on an airline.

None of these efforts, however, reduce the underlying costs of health care in the United States—costs that are 75% higher per person than in other industrialized countries, but result in shorter lifespans and higher infant mortality rates.  These costs continue to rise faster than inflation and chew up an increasing portion of government budgets. If cost shifting is a circular game that never ends, what are we learning about the costs themselves?

One way to examine health care spending is by state. States have widely different population characteristics, political cultures, and economies. How do these affect underlying health care cost trends? A report released June 14 in Health Affairs looks at total health care spending per person by state from 1991 to 2014 and yields some very interesting findings. Among them:

Total per capita health care spending by state varies—a lot. The study looked at all spending; by Medicaid, Medicare, commercial insurance, and individuals. For 2014, the ratio between the highest per capita spending state (Alaska) and the lowest (Utah) was almost two to one (Figure One). That ratio has not changed much in recent years, but differs for Medicare, Medicaid, and commercial insurance. Because of differences in benefits, demographics, and public policies, high-cost states for one payer are not necessarily high-cost states for another. 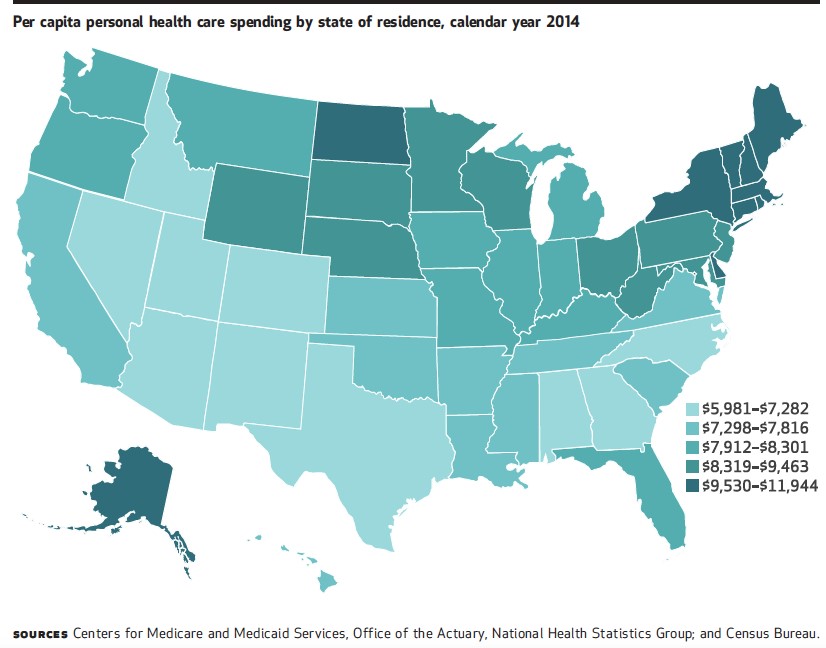 Want lower health care spending in your state? Get poorer, and insure fewer people.According to the researchers, health care spending is mostly driven by personal income. Wealthier states spend more on everything—including health care. Other factors that contribute to higher spending include the percentage of people on Medicare and Medicaid (good proxies for population age and disability), the portion of people insured, and the number of community hospital beds per capita. Chronic disease burden, surprisingly, does not seem to matter much.

Total per capita health care spending is increasing at rates higher than inflation but is not out of control. The average annual rate of increase between 2010 and 2013 was 2.8%—higher than general inflation and lower than previous periods. During this period, Vermont clocked the highest annual rate of increase at 5.2% per year and Hawaii the lowest at 1.5%. All these numbers are considerably lower than what is reported in articles about premium increases, primarily because the average masks wide variation (as purchasers shift costs) and the outliers get the attention.

Want lower rates of increase in health care spending in your state?  Perhaps start with covering more people. States that expanded insurance coverage under the Affordable Care Act had lower rates of increase in per capita costs between 2013 and 2014 than non-expansion states—for Medicare, commercial insurance, and Medicaid lines of business (Figure Two). Presumably, the previously uninsured were relatively healthy and improved the quality of the risk pools for both Medicaid and commercial payers. Squaring this finding with the previous point—that states with more uninsured have lower total health care spending per capita—probably requires a new goal for state level health expenses: that they be low not in absolute terms but relative to the rest of the state’s economy. Massachusetts, a high-cost state, does not seek to reduce its health care expenses, but to increase the rest of its economy faster. 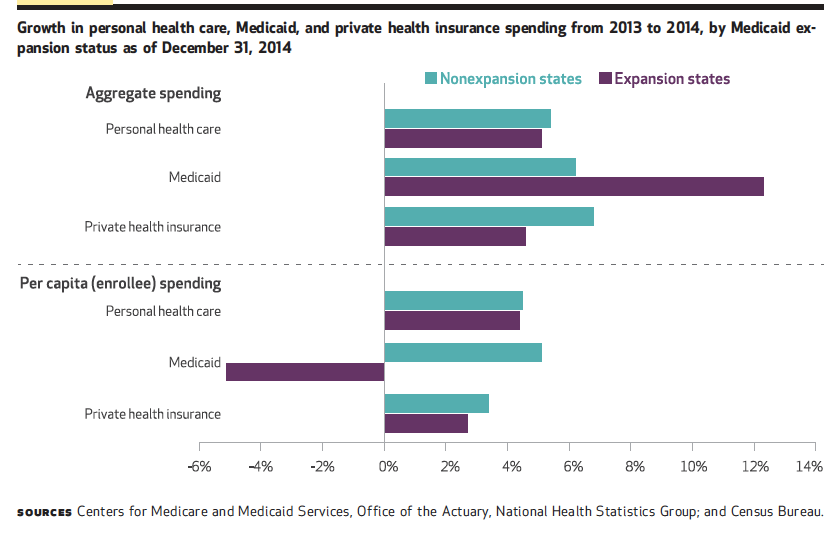 In this era of alternative facts and ideology masquerading as policy, the report—by researchers at the Centers for Medicare and Medicaid Services—is a great public service; a careful, sober analysis of an important and complex issue. It focuses on a volatile period for the US health care system; the period between 2009 and 2014 includes a severe economic recession, a gradual recovery, and major public policy shifts in coverage and provider payment.

These macro-economic effects apparently swamp state-specific policy initiatives to address overall system costs and perhaps even Medicaid-specific efforts. That does not mean state-driven systemic efforts—such as in Massachusetts, Maryland, and Vermont—should be abandoned. It does seem to indicate, however, that economic stability and a federal coverage strategy come first, or at least go hand in hand.

I did not anticipate that this report would lead to a discussion about coverage. In looking at state drivers of total health care costs, I thought it would inform state policies to reduce total cost trends by influencing demand, supply, or the functioning of a market. The evidence of the effect of coverage policies on cost trends is compelling, however.  Only when everybody is in the system, it seems, can one focus on setting persistent, thoughtful public policies that help shape how big the system should be—and how to balance individual choice and the role of government. Then the public discussion changes from tossing the hot potato to the real goal—creating the conditions for everybody to live long and fulfilling lives.