Like rising sea levels, Medicaid costs are flooding state and federal budgets. Medicaid reform efforts, such as those in the American Health Care Act (AHCA), promise more flexibility to states to take on these Medicaid cost challenges. They need, however, to be viewed with caution by state policymakers: addressing the problem should not involve leaky sandbags or throwing people into the currents.

Using data from the National Association of State Budget Officers, the Medicaid and CHIP Payment and Access Commission (MACPAC) has documented how Medicaid is swamping state budgets (Figure One), forcing out expenditures in other socially important areas, including education and infrastructure.

Figure One. Medicaid’s Share of State Budgets Including and Excluding Federal Funds, SFYs 1989-2015 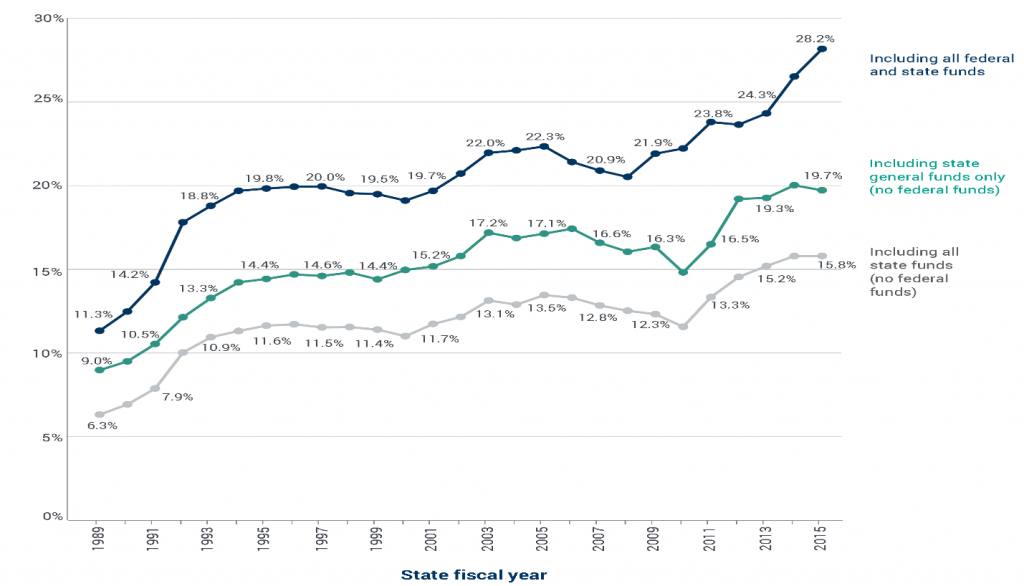 The culprit is not per-person costs. The evidence is clear that state administrators are pretty effective managers of the public purse—total state and federal per person expenditures for Medicaid are rising more slowly than they are for Medicare or for private insurance.

This per-person cost efficiency has been accomplished by noble and crafty means. Legislators have made hard decisions about coverage of optional Medicaid benefits, such as adult dental care. They have outsourced more of Medicaid to managed care organizations and accountable providers, who with the right oversight can improve care coordination for high-cost populations and reduce unnecessary services. Medicaid administrators—unable to print money like federal officials—also routinely gather in settings like the Medicaid Evidence-based Decisions Project to make sure coverage policies reflect current research about what actually works, rather than the ability of providers to promote their services with advertising or reputation.

To be sure, shorter term strategies have been employed too. State officials routinely scour budgets for services and provider fees for which they can claim federal Medicaid funding. Many a state budget has been closed at the last hour with the help of revoked provider fee increases or rate decreases. These cost shifting mechanisms are not sustainable in the long run.

Instead, the driver of state and federal Medicaid costs has been the number of people enrolled in Medicaid. Figure Two, also from MACPAC, shows how closely Medicaid program expense increases have tracked enrollment growth. In part, the rising enrollment numbers reflect raised income eligibility standards for Medicaid programs, but also the reality that household income growth has been stagnant for poorer families. “The real problem with Medicaid spending,” a health economist told me, “is that we are making more poor people.” 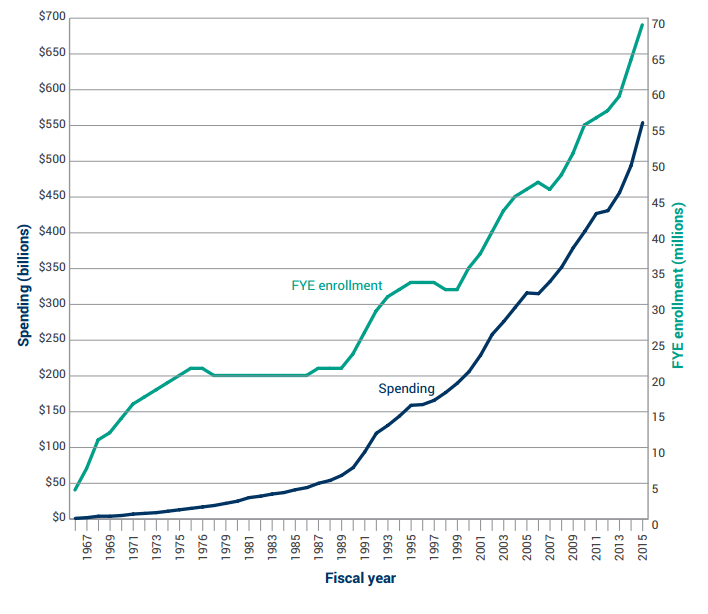 For Medicaid, the AHCA would establish a fixed and reduced federal financial commitment, constituting a cost shift to states of an estimated $457 billion over a ten-year period—a 16% reduction from what they would otherwise receive. States would be left to either raise taxes or reduce expenses further.

Medicaid 101 says there are only three tools for shrinking Medicaid budgets—reducing services, prices, or people. There is probably some juice still left in the squeeze on per-person costs—reducing utilization and cutting provider rates even further. Given the superior performance on per-person costs for Medicaid programs, however, the only meaningful expense flexibility left to states is to reduce enrollment. Current waiver proposals from Maine and Wisconsin start to do that with enrollment management efforts like lockout periods and personal virtue standards like drug testing and work-requirements.

These cuts will not be enough to pick up that 16% estimated cost shift from the federal government, and wholesale reduction in Medicaid beneficiaries would be inevitable, 14 million nationwide in the most recent Congressional Budget Office estimates. These people would not gain private coverage. More uninsured people will only exacerbate the widening gap between the wealthy and the poor in this country and the social discontent that lack of economic opportunity brings.

What else can be done about the increasing number of people on Medicaid? Economic and social policies that lift people out of poverty can reduce the number of Medicaid eligibles and reduce state expenses. But Medicaid’s essential problem is no different than Medicare’s or an employer struggling to provide coverage to her employees—namely, the underlying costs of health care in the country. “Medical costs are the tapeworm of American economic competitiveness,” Warren Buffet proclaimed earlier this year at the Coachella-for-the-not-so-hip, the Berkshire Hathaway annual shareholders’ meeting in Omaha.

Even while Medicaid officials have mostly managed to keep per-person Medicaid costs under control, the health care cost tapeworm is gnawing at Medicaid programs. Artificially low provider rates for Medicaid cannot be sustained and face upward pressure. States are price-takers on pharmaceuticals, with no ability to negotiate or set prices. Most significantly, rising commercial health insurance premiums have eroded the number of people with private coverage and created more pressure for Medicaid eligibility expansions.

As long as the cost management strategies employed by public and private payers consist of cost shifting—from the federal government to state governments, from employers to employees and among payers and providers, we are distracting ourselves from the fact that our prices for medical care are higher than any other country and are projected to rise 3% annually over the next 10 years. And that is before taking into account the effects of aging and increases in utilization. In failing to emphasize prevention, social services, robust primary care and some meaningful form of global budgeting, we encourage high-priced technologies and specialty and acute care.

Cutting people from coverage is not a long-term solution. The small business employers I dealt with in Rhode Island when I was health insurance commissioner understood that implicitly. Faced with rising insurance premiums they would ask me helplessly, “I have already shifted everybody into high deductible plans. What more am I supposed to do? Fire my older and sicker workers? Stop offering coverage to my employees?”

With kicking people off coverage and shifting costs off limits, in Rhode Island we looked at more fundamental cost management options—focusing on high-cost populations, investing more in primary care and health information technology, and accelerating provider payment reform while limiting provider price increases.  The returns are real but slow.

These—and more—are the kinds of efforts that are needed to bring health care costs down. The same attitude by public officials towards lower income citizens would allow us to look upstream at what is causing this steadily rising flood of health care costs, and not merely hope these folks can swim.

Correction: June 15, 2017
An earlier version of this blog post incorrectly stated that the AHCA would give states more management flexibility in Medicaid.