Congress is preparing to debate the future of the Affordable Care Act (ACA) yet again. While “repeal and replace” may take longer than was promised on the election trail, with single party control of both Congress and the White House, changes to the ACA appear inevitable.

As they sort through particular policy proposals, lawmakers should take into highest account the concerns of those most directly affected by the potential changes: low-income individuals with Medicaid, individuals purchasing their own insurance, those in the small group market, and those with no insurance.

The goal of ACA changes is presumably to increase access to affordable health coverage. Some quick data collection—primarily from the Kaiser Family Foundation’s “State Health Facts”—yields the following graphic and some resulting inferences about the most-affected groups. 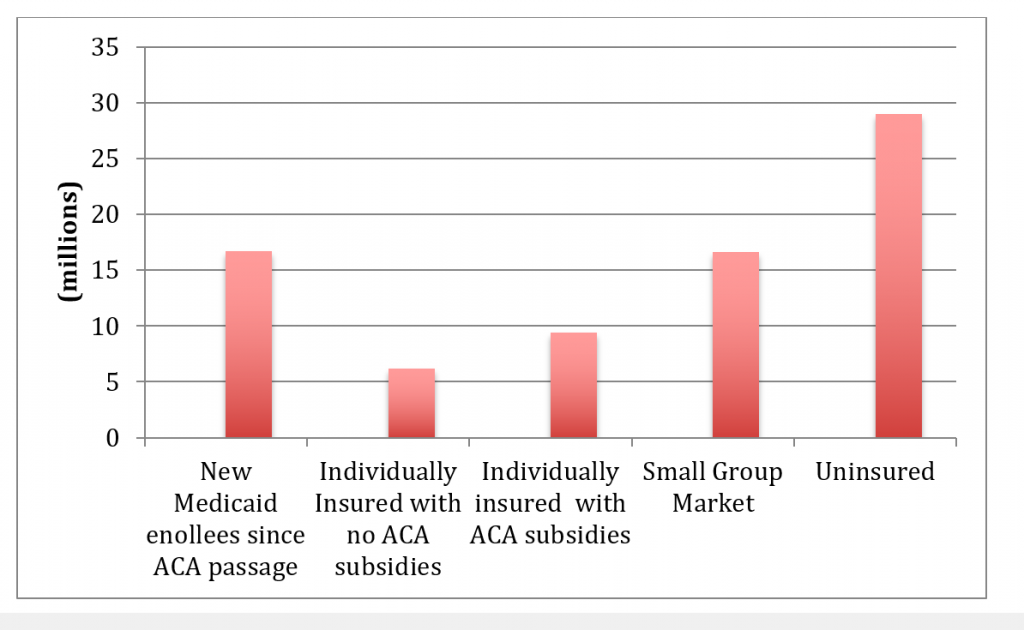 New Medicaid enrollees are plentiful and plenty poor. They are too poor to afford much for their own health insurance, generally earning less than 138% of the federal poverty level—or $16,200 annually for a single-person household and $27,200 for a family of three. Medicaid has provided a relatively simple path to cover many people. Without sizable public assistance, these new enrollees will simply not be able to afford to purchase health insurance and will fall back into the ranks of the uninsured.

Individually-insured individuals who don’t have ACA subsidies bear the brunt of high premiums and big increases, but are relatively few in number. Much attention has been focused on premium increases in the individual insurance market. According to the Kaiser Family Foundation, the rate increase for 2017 for the second lowest-cost silver plan on the exchange (the benchmark for subsidies) was greater than 20% in 24 states. Individually-insured people paying full freight—the smallest in number of any group identified here—stand to benefit the most if ACA revisions attract more healthy people who lower average premiums into the individual market. Insurer competition would also help reduce their price increases. Reducing premiums by relaxing minimum benefit levels—allowing lifetime or annual limits or exclusion of coverage for categories of medical services like pharmacy or mental health—will let healthy people choose these skinnier plans, and raise costs for everybody else.

Most people with individual insurance get ACA subsidies. They have largely been sheltered from rate increases and high premiums. While lower insurance premiums and more insurer choice would also help them, this group—with incomes up to 400% of the federal poverty level ($47,000 for a single person household and $80,400 for a family of three)—needs primarily to keep its subsidies if it is to maintain its insurance. Tax credits or deductions are of less value to those in this group—with lower incomes they may have limited or no tax liability.

The small group market is about the same size as the number of new Medicaid enrollees. The ACA established standard rating rules for health insurance for this group and for the individual market across the country. Many of these rules—such as no preexisting condition exclusions or denials, rating based on age and family size only, and limiting the variation between the highest—to make health insurance cheaper for younger people—will come at the expense of the others.

In spite of the ACA’s efforts, the number of uninsured continues to outstrip other groups affected by the law. The Kaiser Family Foundation estimates that two-fifths of the uninsured are currently eligible for subsidized care under the ACA and have not enrolled (see chart below).  Another 25% are eligible for employer’s insurance or have incomes over 400% of the federal poverty level and choose to go without. It is safe to assume most of the people in this second subgroup are reasonably healthy and are making an economically driven choice not to buy, yet these are the healthy people we need in the pool. If reaching either of these subgroups is a priority, Congress needs to preserve—or even enhance—current subsidy levels, improve outreach, and develop stronger incentives or requirements to encourage these subgroups to enroll. About one-third of the uninsured do not fit the categories described above and are particularly vulnerable politically—either they reside in states that have not expanded Medicaid or are ineligible because of immigration status. 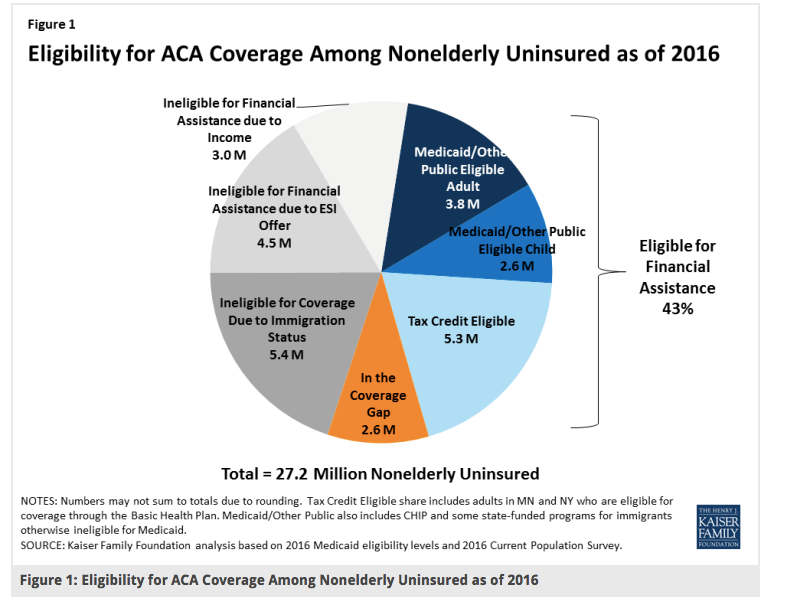 About 50 million people in the U.S. stand to be directly affected by changes in the ACA and another 27 million remain uninsured. Looking closely at specific subgroups, however, makes differences in size and needs clearer.

Medicaid enrollees are the largest group and they will continue to need significant financial assistance. Relatively few people in the individual insurance market bear the full brunt of high premiums—lawmakers should be careful about promising premium relief to them or the small group market that relies on charging sick and older people more, or making less comprehensive health insurance available. Reducing subsidies in the individual market will make it less affordable for the many people who have come to depend on them. Finally the uninsured remain the largest of the ACA’s target groups—they need a mix of outreach, subsidies, and stronger requirements for participation.

There is clear evidence that access to routine care and preventing catastrophic expenses improve the health of populations. How most effectively to arrange for and finance these programs and how to balance population health against other social goals remain an ongoing project for state and federal governments. Any efforts to modify the ACA should prioritize those most directly affected and in greatest need.