Who is Responsible for Our Health?

If I die before my time, is it my fault? If I drank a lot of alcohol, drove too fast, didn’t wear a seat belt, and crashed—most would say yes, I had it coming. If I got hit by that driver while walking on the sidewalk, it would be a terrible tragedy. 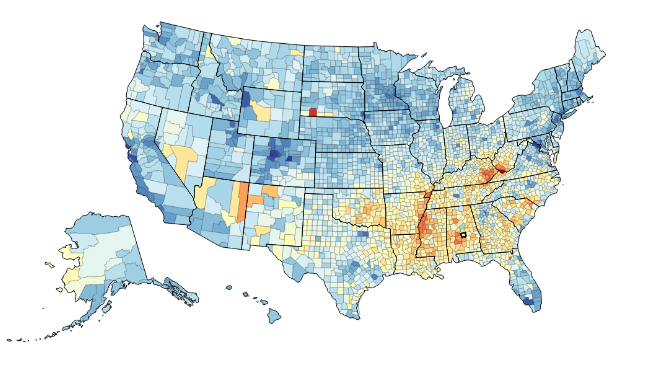 Figure 1: Life Expectancy of Males at Birth in 2013.
Source: University of Washington Institute of Health Metrics and Evaluation

What about groups of people who die early? This occurs more frequently in some parts of the country than in others. It is a lot tougher to be a male born in McDowell County, West Virginia, (illustrated by the deep red in Figure One—life expectancy at birth in 2013 of 62.5 years) than in Santa Clara County, California (dark blue—life expectancy, 81.6 years). Whose responsibility is that?

Disparities in life expectancy based on race, ethnicity, gender, and income have been well documented. But here is news. We have better research now about the efficacy of public policies that reduce these disparities. Raj Chetty and his colleagues have shown how gaps in lifespan between poor and rich vary based on geography. Research published earlier this month by Elizabeth Bradley and her colleagues appears to show an even more direct link between health outcomes and types of public spending. They found that states with high ratios of social to medical spending enjoy better health outcomes, including in obesity, asthma, mentally unhealthy days, days of activity limitations, postneonatal mortality, and lung cancer mortality, even when accounting for the states’ sociodemographic, economic, and political characteristics. (See Figure 2.)

So if we know that life expectancy depends on how rich you are and where you are born, and we know that public policies can close that gap, what stops officials from taking on that challenge? We have evidence of the problem and now some solutions—what are the barriers to acting on the evidence? 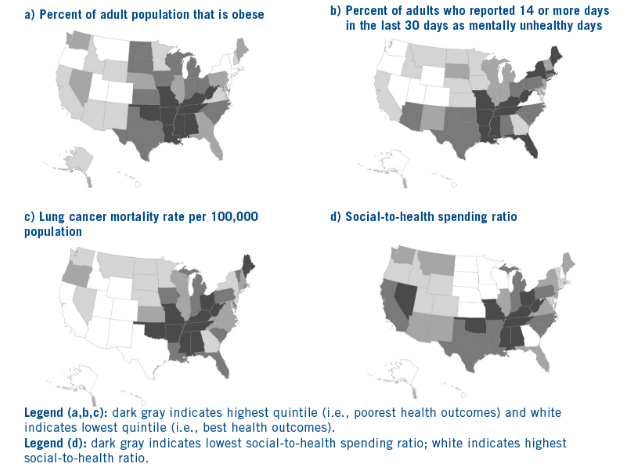 A new Fund report written by Erika Rogan and Elizabeth Bradley, Investing in Social Services for States’ Health: Identifying and Overcoming the Barriers, asks this critical question of a diverse group of state and local policymakers, has them identify strategies for addressing those barriers, and then gives examples of where those strategies are being deployed. It is good reading—the narrative to accompany the research on a question of vital importance to the country at a time of increasing social inequity.

The framing of the problem in the paper and the barriers identified both merit particular attention. They come from front line policymakers at the state and local levels, who represent executive and legislative branches, Republicans and Democrats, from states with lots of blue and lots of orange on the map in Figure One.

The societal problem the paper takes on, as refined by the participants, became, “States do not make overall budget and policy decisions that optimize the health of the population in the state.” This is objectively true—there is ample evidence, for instance, on the importance of early childhood development, obesity reduction, and primary care infrastructure on overall population health, and demonstrably effective interventions in each of these areas, and yet all are routinely underfunded or rejected as policy options.

The interesting question then is why. If we know what works, why don’t we do it? The insights from our policymakers are at once simple and profound.

First, the health of the state’s population is not always prioritized relative to other societal goals in the states. Values conflicts are real and cannot be dismissed. Competing societal goals include maximizing personal liberty and minimizing the size of government and its taxes. Advocates of improving population health need to acknowledge the legitimacy of these competing values and the reality of the conflict among them. Yelling louder about one’s own priority will not resolve this conflict.

Second, incentives, including financial and political incentives to improve health, are misaligned. Even if values conflicts are reconciled, economic and political ones remain. In addition to fee-for-service provider payment mechanisms that incent volume over quality, policymakers pointed to the “wrong pockets problem” in government, where expenses incurred by one agency (say, public health) result in savings in another (Medicaid or public employees). Population health also does not have individual beneficiaries who testify for laws and fund political campaigns. In addition, the delayed returns from investments in social services and population health—years for early childhood interventions—require a longer time frame than many revenue-strapped governments believe they can afford.

Finally, there is a lack of consensus regarding who is responsible for health. Is my health a function of dumb luck (genes and where and to whom I was born) or my personal actions (behaviors such as diet and exercise)? Personal responsibility, a character trait that most feel is the mark of emotionally stable and healthy individuals, is socially desirable. How our laws encourage or discourage that trait is a heated topic, and the fear that public policies can discourage it is a legitimate one. 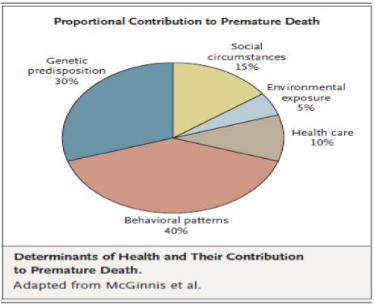 The role of personal responsibility in health outcomes need not be a values conflict, however. There is research on the causes of premature death (a pretty good measure of health), and the best evidence says these causes are a combination of circumstance and personal action. (See Figure 3.)

So the answer to the question of what drives the health of people and communities is not personal responsibility or social circumstances, but both. Can this kind of evidence help break down the last barrier cited by the experts—who is responsible for our health? Perhaps, but it must be accompanied by dialogue and compromise. The conditions under which Indiana, Arkansas, Iowa, Michigan, New Hampshire, and Montana have expanded Medicaid eligibility all involve health care benefits tied to the enrollee’s “personal responsibility.” Such conditions are based as much on compromise as on evidence.

The remainder of the report identifies strategies for overcoming these barriers, acting on the evidence, and investing in social services to improve population health. It also assesses four sites where these strategies are being deployed. It is hopeful and enlightening reading. People committed to improving population health would do well, however, to contemplate the three challenges to this work our experts have identified, in particular the last, regarding the role of personal responsibility. It has vexed every society since the dawn of time: Am I my brother’s keeper?