You would think a billion-dollar-a-year organization that pays its chief 20% of the market rate and turns that role over every two years—as is the case with state Medicaid programs—might start to consider the importance of leadership. Leadership also seems important for a public health agency charged with guarding the safety of food, water, and patient care, or a child welfare or human services agency.

One of the Milbank Memorial Fund’s strategic priorities is to strengthen the ability of people in state government to make good health policy decisions. States bear large and growing responsibilities for spending money and developing policies to improve and maintain the health of their populations. Their policies can squander resources, but they can also improve the health of all citizens.

Next month, the Fund will release a report that looks at how states might think about organizing their Medicaid programs and designing the leadership role. State Medicaid programs provide services that have grown to comprise 25% of state budgets. Failure to pay attention to how they are run could threaten population health and take resources away from other demands of state government, such as education, transportation, housing, and tax relief.

State health policy leadership is required beyond Medicaid programs, of course, and future leaders need to be cultivated. This point was brought home for me last month when the Fund convened 18 state officials for our inaugural Emerging Leaders Program (ELP). The program—and its attendees— were provocative, hopeful, and a reminder of all the work that needs to be done.

The ELP was initiated by our Reforming States Group (RSG)—whose members wanted ways to spread effective health policymaking skills in their own states. Legislators in the RSG know junior colleagues who are concerned about the complexity of health care financing and delivery, and challenged by dealing with narrowly focused interests pleading their special causes. Executive branch officials see junior staffers implementing myriad projects in this post-ACA world. Overworked, under-resourced, and drinking from the proverbial firehose, these people are too busy to step back and reflect, and are courted regularly by private sector employers with lucrative jobs. 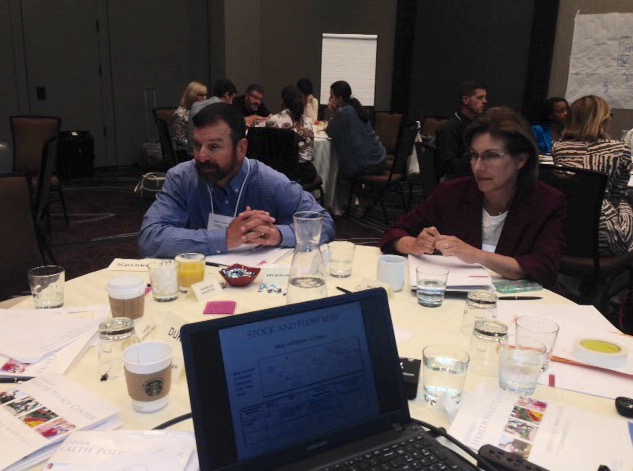 What skills do leaders need in today’s health policy world? For two days ELP participants gathered in Denver to learn from RSG officials, expert faculty, and one another. Topics included evidence-based policy making, systemic thinking, leadership communications, and making the case for investing in the social determinants of health. Experienced state leaders talked about facilitating consensus, the state budget as a policymaking tool, and how they’d made their own career choices.

The tone for the session was set the first night by former Colorado Governor Richard Lamm. No stranger to leadership controversies himself, Lamm modeled two aspects of leadership for the attendees. First, his long career as elected official, author, intellectual, and teacher is a statement of public service—exploring what constitutes “the public good” in a variety of settings. Second, Lamm issued a strong challenge to those present and the next generation of public leaders to resolve the conflict between unlimited expectations of government and limited capacity to pay. Not all agreed with the Governor’s framing of the challenge, but everybody learned from his example that leadership can involve asking uncomfortable questions.

Participants came away from the program enriched and challenged. “Having both executive and legislative branch attendees allowed for candid discussions,” said Eric Barlow, Wyoming House of Representatives. “The engaging format and dedicated participants at the workshop were refreshing.”

The Fund will continue to do this work—providing ongoing programming for participants and future leadership programs, all the while linking these to the activities of the RSG.

Necessary, but not Sufficient

The challenges of building the administrative capacity needed to prudently manage large state programs or develop effective legislation requires more than well-designed leadership programs. Identifying and grooming capable leaders is not enough to ensure that our schools are capable of producing a well-prepared workforce, that our public health funds are well spent, that our roads, bridges and neighborhoods are safe, or that our environment is healthy.

Successfully carrying out these essential collective functions requires that people trust their elected and appointed servants, and that those officials continually earn that trust. With trust comes the public’s engagement in the nuts and bolts of building community and the commitment of votes and tax monies that allows government to function well.

Candidates who campaign by deriding the very government functions they are asking to lead do not merit that trust. Citizens who breezily dismiss government for limiting personal freedoms or wasting their money while they put out their trash and wait for their Medicare benefits will get the government services and servants they deserve.

I was impressed with the people who came to our ELP program. To a person, they were motivated by a desire to serve their communities. It is a privilege to help them learn how to do it better and to shape the kinds of leaders who will be able to build the public trust necessary to make Medicaid programs and other government services worthy investments.