Randy Newman had it right 28 years ago and today—judging from recent events in Baltimore. Riots tore apart the city at the end of April in the wake of Freddie Gray’s death in police custody, and the after-effects continue to ripple. Homicides in May of this year were 50% higher than May of last year driven, some say, by the large amounts of drugs in circulation looted from 27 pharmacies and two methadone clinics during the riots.

The news that socio-economic and geographic disparities in health exist is hardly new, but gained trenchancy in the wake of the unrest. The interactions between the various factors and the outcomes may be difficult to untangle, but the inequities cited here breed the social unrest the city witnessed.

The renewed attention on health disparities and their connection to social unrest creates an opportunity for people who work in health care and population health to call to mind a few important lessons. 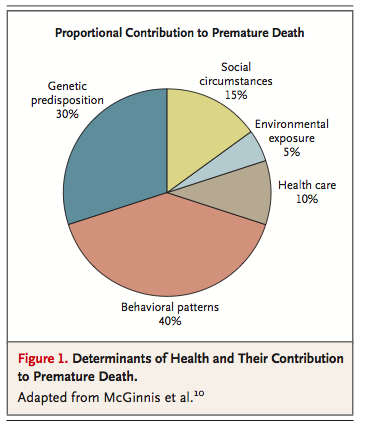 First, public health has it right. If we value long life spans for ourselves and our neighbors, we cannot lose sight of the factors that make those long life spans possible. McGinnis and his colleagues put the contributing factors to premature death as follows:

Notice the small size of the health care slice of the pie. Keep that in mind as Congressional members rush to hop on the “21st Century Cures” legislation bandwagon and dole out protections for one set of innovators—the pharmaceutical industry. Similarly, dollars spent developing and promoting a hospital’s cutting-edge surgical capacity are dollars not available for preventing and treating the chronic conditions that disproportionately affect poor neighborhoods. Indeed, lead poisoning’s effect on brain development was in part what sentenced Freddie Gray to a short and unfulfilled life. If we are committed to long life spans for all, no new drug or surgery can do the work of a safe environment, a stable childhood, and a good education.

Sometimes lost in the discussion, however, is that progress is being made. From the University of Wisconsin’s County Health Rankings comes analysis that Baltimore’s health status is slowly approaching that of the entire state: 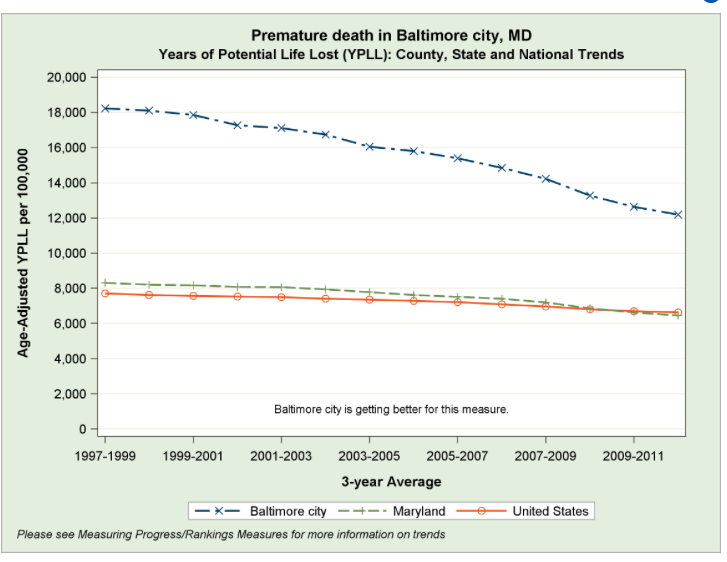 This is good news and not the result of chance or a rising economic tide. Rather, committed, persistent public health leadership and investments in epidemiology and interventions that focus on prevention are paying off. There will be fewer Freddie Grays in Baltimore’s future because of lead poisoning prevention efforts. The city and its inhabitants will continue to reap the rewards of successful efforts to lower smoking rates. In the future, statewide efforts to promote payment reform and make providers accountable for the health of populations will create greater opportunities for investment in and integration with these public health efforts.

These improvements do not, however, take away from the fact that disparities in health status remain—and that for too many in Baltimore it remains “hard just to live.” Equal access to decent housing, a good education, employment opportunity, and criminal justice will continue to be critical issues in Baltimore and many other places in the US. Money spent on health care is money not available for child care, schools, and community centers. We ignore these facts and misplaced priorities at our own peril and that of our communities.

Last summer, the news was full of stories of kids sitting in juvenile detention camps in Texas after walking alone from El Salvador and Guatemala to escape violence. Some of those kids are now in Baltimore—and have worked hard enough to be finishing eighth grade and graduating from places like Armisted Gardens School in East Baltimore. They have come so far in only a year. But what future—what hope of a long and fulfilling life—are we giving them, and others, who live in Baltimore and other low-income communities across the country?

Just as helping people achieve long life spans requires looking beyond the allure of individual patient care to the lessons of public health, the health of communities and societies requires attention to fair and just economic, political, and legal processes.